I remember reading an article in the late Seventies in which the author stated at the time that the five greatest songwriters at the time were Bruce Springsteen, Elvis Costello, Tom Petty, Bob Seger and Graham Parker. And, at the same time, he was celebrating that the fourth of his five finally had his first Top Ten Album in the U.S. At the end of 1979, Tom Petty finally joined Springsteen, Seger and Costello when Damn the Torpedoes jumped into the Top Ten, finally peaking at #2. And I was familiar with all five names and their music, including the odd man out, Graham Parker.

In 1979, Parker’s debut album was the complete opposite of that album’s title, Howlin’ Wind. Instead, here in the States, his debut was more like a whimpering breeze., here today, gone tomorrow. But, you could hear something similar to Elvis Costello in his music. His music was steeped in the same R&B sound as Springsteen’s and Costello’s music at the same time. And, at the time, Costello had his “angry young man” personae going, Parker’s lyrics were much more acerbic. Sure, Costello was “biting the hand that feeds” him with “Radio Radio”, but Parker was tackling much larger symbols of rock corruption when he released his anti-current label diatribe “Mercury Poisoning”, where Parker accused Mercury for not just his marketing failures in the States, but everything else that was going wrong in Parker’s life. No one had attacked his label before in song on an album, but Parker did. And, that stance alone won me over.

Then, I purchased his now classic album from 1979, Squeezing Out Sparks. Nothing labeled as “new wave” was as influenced by punk as that album. There was anger all over the album, including in his now iconic song “Local Girls”, to which this geeky teenage version used to dedicate to all of the girls in his hometown on his high school radio show. But, Parker never hit the Top Ten on our album chart. Not even when he ditched his great backing band, the Rumour, and used musicians from Springsteen’s and Petty’s bands on his next two albums. Both were serviceable and professional, but not Squeezing. 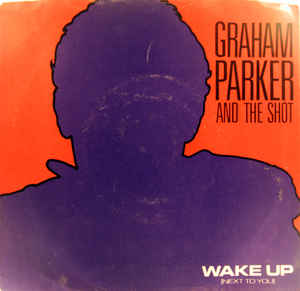 Then I ignored his next album, The Real Macaw. But, in 1985, Parker released a great 60’s-influenced R&B song that both my wife and I loved called “Wake Up Next to You”. I loved the song so much that I began lobbying my then-pregnant wife if we could name our baby, if it were a boy, Graham. Needless to say, our elder son is named Graham, but it’s NOT for Nash! It’s for Parker.

Now, skip ahead to 2012, to the movie This Is 40, in which Paul Rudd’s character runs an independent record label trying to sign Graham Parker and the Rumour. The only thing is that Rudd’s company cannot afford to fly the Rumour over from England to play a gig in the USA. Needless to say, Parker was fantastic in the movie, and, better yet, he and the Rumour really had reunited to created the fine album called Three Chords Good. All of a sudden Parker had a small amount of buzz around him, even though it was definitely 35 years too late for him to reach superstar status. Still, his music was once again permeating through my household, making my wife ask the eternal question, “what ever happened to him in the first place?”

Still, I was never prepared for the musical tour de force that he and the Rumour released last year, Mystery Glue. This was the album that he should have made back in 1980. He has some R&B-influenced songs for dancing, while also including some Ray Charles-influenced ballads that roll along much like those by the aforementioned Brother Ray. The best part is that his anger is temper a bit by age, acknowledging how we can all get knocked down by life. But, it’s how we bounce back up to face our adversities that will define us. An angry man in his twenties my not catch that theme, but an angry man in his sixties will, if he is perspective enough. Fortunately, my hero Graham Parker is.

When I wrote my list of the Top 40 Albums of 2015, Mystery Glue was in my Top 5. And, I feel it belongs ranked that high. It is an album that was written for all of us who are being squeeze in life by our children beginning to leave home and our parents’ health beginning to wane. Sorry Graham Parker that you had to wait so long to write your masterpieces. Few have been rooting as hard for you during your career as I have. Godspeed Graham Parker! 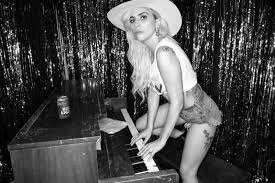 Count me in! I am committing myself in becoming a fan of Lady Gaga. That’s right! Is there room for a 53-year-old Monster? I hope so, because I withstood the hype until her recent performance on Saturday Night Live. So, I went out and got her latest album, Joanne. Now, I’m all in on this little dynamo of a performer.

I have to be honest. When she first arrived on the scene back in 2008 and 2009, I literally thought she was Madonna rip-off who had the great taste to name drop David Bowie, Queen and Elton John as musical role models. Sure, all musicians aspire to that level, or some equivalency depending on the type of music they are writing. The only thing is that Lady Gaga has made a slow deliberate shift into artist mode.

Look, she began as a very good dance artist. Then, on her second album, Born This Way, Gaga made a slight turned into the very appropriate ’80s-type dance-rock music. On that album, Gaga became a superstar. Unfortunately, superstar status is a relatively easy level to reach in the 21st century, but a very hard thing to maintain. How many times have we watched the latest pop queen reach the top, only to follow up the triumph with an album that only makes your shoulder shrug. No matter how much hype the pop press wants to give Beyoncé or Rihanna or Drake, I only shrug my own shoulders at their latest masterpieces. Sorry guys! I’ve heard it before and done better by some little known artists from the Seventies. Oh, and Katy Perry? Please! Or OneRepublic? Uh, no! These are all the artist equivalencies of pop rocks.

But, Lady Gaga backed away from that superficial superstar status in order to become an artist who is becoming worthy to be listed amongst those she idolizes. First, she is blessed with the best voice that is now capable of emoting the pain we all experience. Sure, her fourth album, Artpop, was a mess, but at least she was reaching for more substance than her peers. But, I watched her make artistic strides by recording an album of duets of classic jazz and pop songs with the immortal Tony Bennett. Her association with the King of Cool was the kind of stamp of approval that I was looking for. Yet, I was not prepared for her latest album, Joanne. 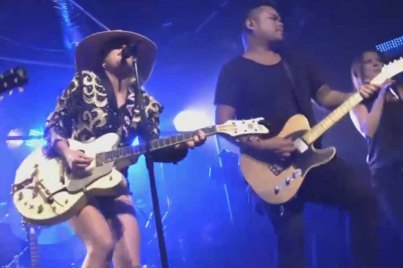 Yes, you can still dance to much of her new music, but you can find her branching out with touches of country-rock here or flat-out rock there. But, what pulls me in the most is her voice. Now, I can feel her pain, joy, or whatever emotion she is throwing at us. I know that right now this album is getting pretty average ratings, but this album is one of those that will on grow on you after percolating for some time.

Highlights are “Diamond Heart”, “A-YO”, “Come to Mama” and “Hey Girl”, a duet with Florence Welch of Florence and the Machine. But, the emotional centerpiece of this album is the beautiful piano-based ballad “Million Reasons”. That song continues to grab me by the throat each time I hear it.

I think Lady Gaga has finally made an album worthy of her last name, which she copped from the Queen song “Radio Gaga”. If she keeps up these artistic moves, Lady Gaga will become immortal like her heroes. She finally is beginning to become an artist. 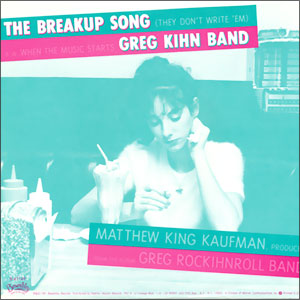 Some songs just click with us right from the moment we first heard and continues to do so many years later. On song that connected with me from that initial moment is the Greg Kihn Band’s 1981 hit “The Break-Up Song”. To this day, whenever I hear this song, I am transported back to the summer of 1981, when that song got some medium airplay on a couple of radio stations in the Indianapolis whose signal was broadcast throughout Central Indiana. And, since I loved the song, I had to go out and buy the album.

As usual, the Greg Kihn Band’s 1981 album, RocKihnRoll, is a power pop masterpiece. But the centerpiece song was “The Break-Up Song” with the lyrical hook that “They don’t write ’em like anymore.” Which seemed to be an true and ironic statement at the same time. Often, I have attempted to write such a sentiment without success. In other words, the simpler the song sounds, probably the more difficult it is to honestly come up with a song like that. That’s why there are so many one hit wonders.

Still, as far as I am concerned, Greg Kihn should have had more hit singles than he did. In addition to “The Break-Up Song”, that feel-good, summery hit of 1981, Kihn scored again, this time with the biggest hit of his career, “Jeopardy”, which was a Top 10 hit in 1983. To be perfectly honest, I was only a lukewarm fan of that song. To me, it sounded just a bit contrived in order to succeed on MTV, even though I doubt Mr. Kihn would ever really “sell out”like that. But, if we are to be honest with each other, “The Break-Up Song” is the better song.

Right now, I am listening to the RocKihnRoll album for the first time in 25 years, and, besides all the memories associated with the album, I am pleasantly reminded of what a great album it is. Kihn is able to show off his songwriter’s ability to write pure pop for now people, as well as pop songs with a Motown undercurrent with “Womankind.” Kihn also had the ability to predict the “harder” power pop of Donnie Iris with his songs “Can’t Stop Hutin’ Myself” and “Trouble in Paradise”.

Unfortunately (or is it really fortunately? You make the call), rock history is littered with terrific journeymen songwriters like Greg Kihn. I have previously written about Marshall Crenshaw, but there are also Tim and Neil Finn of Split Enz and later Crowded House, Graham Parker and Todd Rundgren. All are fantastic songwriters, yet are met with middling sales and give-or-take critical response. To me, these are the kind of rock songwriters I enjoy, since they are all willing to take risks that may result in failure rather than staying on a path that is less artistic but much more lucrative.

My music collection is loaded with the works of those mentioned, and all the others who fit into this category. I could name drop all day long, but I would be remiss if I did not add Paul Westerberg, formerly of The Replacements; Joe Jackson; and the granddaddy songwriter of my generation, Elvis Costello. Anyway, I will always pick up new music from these people because they run contrary to the chorus of “The Break-Up Song,” since many of these aforementioned artists have recently released some of their finest work here during the 21st century.

Sure, I find joy in my older music. But, I still love to listen to the latest music by many of the artists I listened to in high school and college. Many older artists are currently experiencing a revival in their talents, so you should check out their current CDs. Graham Parker, Joe Jackson, Elvis Costello, Pretenders and Squeeze have all released some of their finest work over the past three or so years.