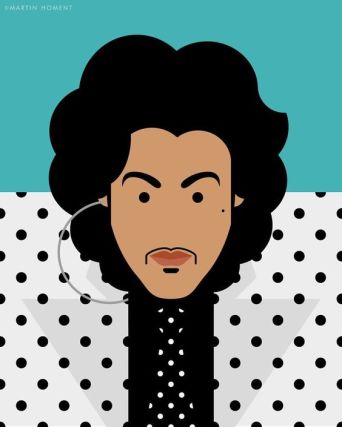 I text my boys to see if they had heard, since the poor men had grown up hearing Prince music throughout the house. My youngest even said he was near tears when he walked into his class to teach. My oldest was “bummed”, which is his speak for sad. I am beyond bummed and nowhere near tears. I am numb, completely numb.

After watching the news coverage for a few minutes, I decided to walk the dogs to collect my thoughts for this blog. Sure, David Bowie’s death had hit me hard, but this was Prince! Prince got me through the Eighties. Prince was the only artist to truly take rock, New Wave, punk, funk, R&B, heartland rock, and whatever else he liked, and synthesized those influences into an amalgam that was called the Minneapolis sound, since that’s where Prince came from. His music and lyrics were a call for racial harmony, and, hell, he even lived that harmony in his band selection. Nearly every band with whom he performed was interracial and had men and women playing. Being from a predominately white town in the Midwest, I appreciated this racial unity and gender harmony.

He followed up the Purple Rain blockbuster with what Rolling Stone called a pastel Easter egg album called Around the World in a Day. While most did not care for this Sgt. Pepper/Paisley Underground-infused album, I darn near wore out my copy. I loved the psychedelic touches to his funk. And, as the Eighties progressed, that sound only grew. Sure, he made a clunker of a movie called Under the Cherry Moon, but the “soundtrack” to the movie, Parade, was a long-simmering masterpiece. It took us ten years to decipher how great that album truly was. Next, he released another double-album masterpiece, Sign ‘O’ the Times, which was a summation of everything from Purple Rain to the present.

Unfortunately, at the last minute late in 1987, Prince decided to pull the plug on what would have been another masterpiece of an album called The Black Album. Prince said he had a vision from God telling him to pull those dark forces off the shelves and replace it with something more spiritual. Rumors say it was due to Prince taking too much ecstasy. For whatever reason, a great was replaced by a more challenging album, Lovesexy, whose stock has been rising with music critics as the years pass. Eventually, Prince did release The Black Album to less fanfare in the Nineties than it deserved.

When the Eighties ended, so did Prince’s commercial appeal. Although he would remain prolific to the end, he would only intermittently achieve commercial success. Sure, his recent stuff has been lyrically homogenized, but who really could keep changing music? As we now know, no one can maintain that kind of impact forever. Heck, the Beatles may have made the best commercial decision to break up when they did, so we will only know their successful music. C’mon, their subsequent solo careers showed that their impact would have waned by the mid-Seventies with the occasional “comeback” every couple of years. Sound familiar? Uh, see the Rolling Stones’ career.

We were blessed to have had this musical genius called Prince. Yes, I am very sad at his passing. But, my music room is full of vinyl albums, 12″ dance mixes, 7″ singles, CDs and mp3s of his music to last a lifetime. My advice is to find a bootleg of his Nineties output called The Dawn. This piece of masterwork was the whole reason changed his name to that symbol. It was supposed to be a triple-CD release, but the company rejected it. Subsequently, much of the material was released on three lesser albums: Come, Gold and Chaos & Disorder. I have heard a recreation of what that album supposedly was to sound like, and I think it is brilliant. To me, that album would have put him back on the map, commercially speaking. To me, that lost album is his most satisfying artistic vision of his career. You have to hear it to believe me, but he proves he is the funkmeister of our generation, as well as THE guitarist of our generation.

Prince’s death will put an end to his musical creativity. But, supposedly, he has over 500 songs left in his “vault”. That will remain to be seen, but at least we still have his fantastic library to pour through as we wish. Personally, I am sorry to see him gone, but I will continue to revel in his music until my own passing. RIP Prince.