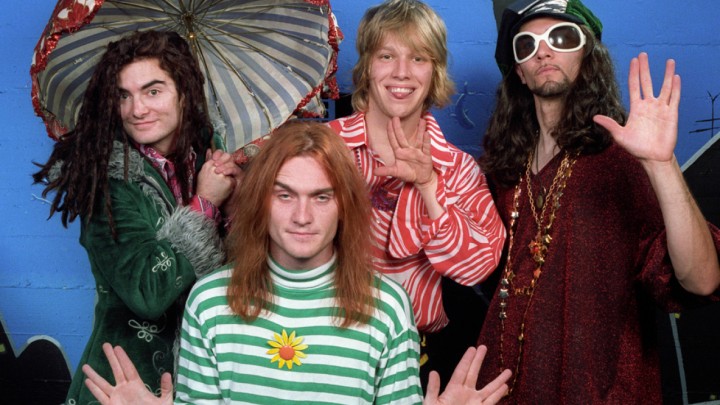 Remember what radio and MTV sounded like in 1989? As Ia reminder, we were getting the rest of the crappy hair metal bands that had not been signed at the beginning of the craze. I am talking about bands like White Lion, Firehouse, Nelson, Winger, Tesla and all of the other look-alike/sound-alike Sunset Strip crap bands that were left-over after all the better bands had been signed and had success. Also, we were being fed such ear-food by the likes of Taylor Dayne, Paula Abdul and Milli Vanilli. You know, those synthesizer-based dance artists. Here and there were rays of hope in the form of Tom Petty, who released his highly successful Full Moon Fever that year. Additionally, there were hit songs by alternative artists such as Love & Rockets (“So Alive”) and The Cure (“Love Song”). Heck, things were so bad on the radio that when The B-52’s made a comeback album, we gave them two hit songs: “The Love Shack” and “Roam”.

When 1990 rolled around, I was hoping for something to break through and inspire my musical appetite. Things were moving slowly at the beginning of the year. Sinéad O’Connor released an excellent album, I Do Not What I Haven’t Got, that contained the great Prince cover of “Nothing Compares 2 U”. Sure, Faith No More released the great song “Epic” from their classic album The Real Thing.

However, one day after taking Graham to school, I came home before I left for my second shift job in the hospital lab. I turned the TV over to MTV, when VJ Adam Curry was babbling on and on about this new L.A. band whose video they were going to debut right then. At that moment, I was thinking, “Oh great, another hair metal band.” Then, he announced the song being “The King Is Half-Undressed” by Jellyfish.

What first captured my attention was the psychedelic paisley swirl of colors in a Lewis Carroll-esque world. That piqued my interest since I loved all of those Lewis Carroll stories. As the video continued, I began to take in the music, which reminded me of the great Eighties band Squeeze. That meant this new band, called Jellyfish, was a power pop band. And, boy, do I love power pop music!

During that year of 1990, I could not find the Jellyfish album anywhere I went in Central Indiana, so I merely put the band Jellyfish in my memory bank. And, the band remained there until June of 2009. That was when I found that first Jellyfish album, called Bellybutton, on iTunes, along with their second (and last!) album, Spilt Milk, which was released in 1993. So, I downloaded both albums, put them on my iPod, and totally fell in love with this band called Jellyfish.

As I listened to Bellybutton, I heard a band that should have been HUGE. I heard all of their influences, such as the Beatles, Squeeze, Badfinger, Queen, Raspberries and Big Star. That was so very important to me, the latent power pop fan. Next, I played Spilt Milk. I heard those very same influences along with some Wings and Klaatu. I was hooked on both albums. I kept playing them and playing them throughout my last fusion surgery recovery time. I kept hearing more and more interesting touches in the production. I was now a full-fledged fan of Jellyfish. Unfortunately, the band broke up shortly after the release of their second album. Since that time, I have been collecting Jellyfish music.

Omnivore Recordings began releasing vinyl and CD versions of the music of Jellyfish. The company has done a terrific job with the CDs they have released. In addition to the two studio Jellyfish created, Omnivore released a live recording called Live at Bogart’s. On that album, you get to hear the band fortifying their sound with covers of some great Seventies power pop covers.

On Black Friday Record Store Day 2012, Omnivore released a special, numbered release called Stack-a-Tracks, which happened to be the instrumental tracks of the songs from Jellyfish’s two studio albums. At first, the listener may have trouble finding his or her bearings without the vocals. But, once the tracks have been relieved of the vocals, the listener begins to hear all kinds of instruments utilized in the mixes that those faultless vocal harmonies used to cover up. Jellyfish’s songs were much more complex than their melodies allow you to believe.

Finally, Omnivore released another living recording, this time from the band’s radio performances, which is called Radio Jellyfish. Once again, it was interesting to hear a band that is mostly a studio concoction turning into a live force. 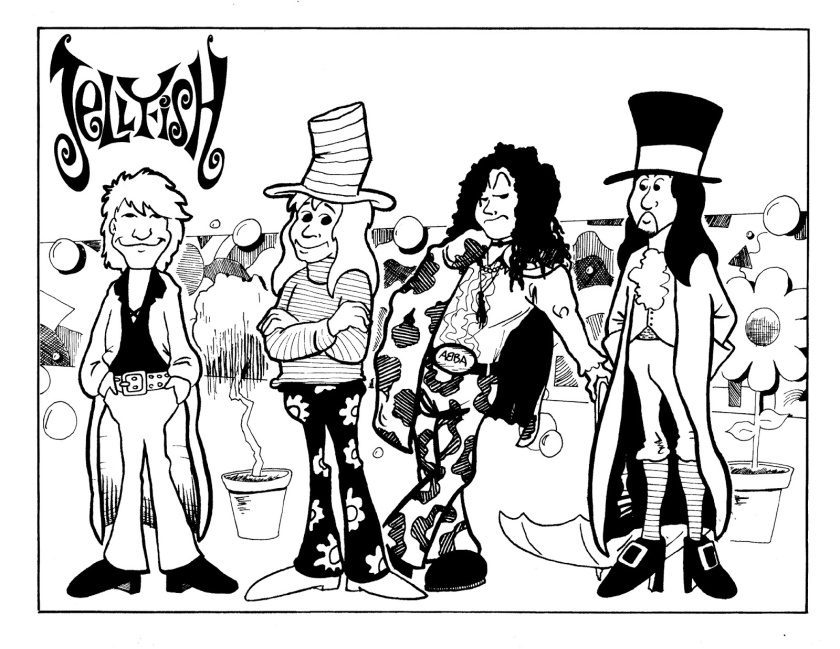 Once again, I have another band that I love who very few have heard or even heard of. Just like the Raspberries and Big Star, I have a favorite that has not received the success it deserves but has become a cult phenomenon. All I can say is “CHECK OUT THIS BAND!” Or, you could print off this coloring picture of the band and color to your heart’s content. At least a new book is going to be released about the history of Jellyfish, and I have mine pre-ordered. At least I got that one going for me.