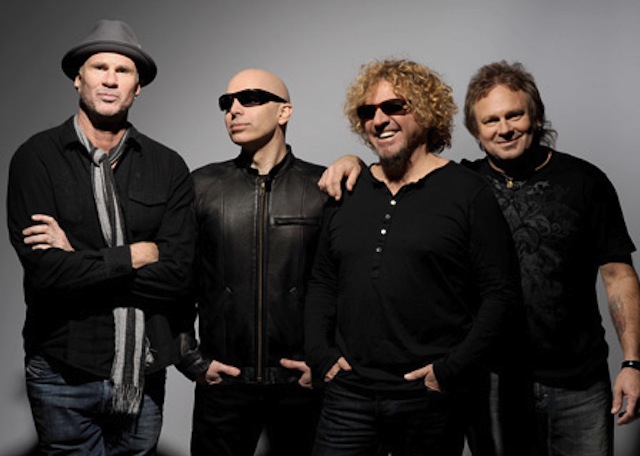 Chickenfoot HAS got to be the worst name for a band, let alone a supergroup made up of guitar virtuoso Joe Satriani, former Van Halen and Van Hagar bassist Michael Anthony, Red Hot Chili Peppers drummer and Will Ferrell look-alike Chad Smith, and vocalist from various groups and solo projects Sammy Hagar. When this group was announced in 2008, classic rock and metal fans everywhere rejoiced. And, as a music fan, I too was intrigued. I had to hear what this band would sound like.

In June of 2009, Chickenfoot released their first album entitled Chickenfoot. Then I played it. I must say that the first album sounded exactly like the Hagar version of Van Halen, only instead of a Eddie Van Halen guitar solo that flowed nicely within the song, this group’s songs would abruptly break for some crazy guitar solo that only Satriani could whip up, then just as abruptly we go back to the “song”.

Each and every member is an excellent individual player. Unfortunately, what may have sounded like an awesome explosion of music when the members got together for the first time at Sammy’s Cabo Club. And, honestly, they probably were fantastic during a tequilla-filled evening of jamming. But, when it came to writing songs, they all sounded like Sammy Hagar solo or half-baked late-Eighties Van Halen songs with crazier guitar solos simply spliced in the space where a more melodic solo would normally be.

Still, I gave the band a second chance upon the release of their second album in 2011, sarcastically titled Chickenfoot III. Unfortunately, this album seemed hastily put together. So, the sound seemed spliced together even more. When the band eventually went on tour, Smith could not go. So, another great drummer by the name of Kenny Aronoff, former drummer for John Mellencamp’s band in the Eighties and into the Nineties, went out instead.

Near Christmas of 2012, the touring band released a live album, called Chickenfoot LV. Once again, this album did not prove the should-be prowess of this band. Unfortunately, the band seemed uninspired, which was too bad, as I was hoping that they would show their true strength as a band on a live album. But, such was not the case. All of the successful bands have a certain chemistry that Chickenfoot, despite all of their individual prowess, did not possess as a band. And, that is what the downfall of many so-called supergroups is – a lack of chemistry.

Tomorrow, we will finish up this week on supergroups. Then, I will attempt to find a topic you will enjoy. Peace out!