In college, I had a series of pretty great roommates. I had great fun with my sophomore roommate, Ron, but my junior roommate, Bruce, and I took fun to a whole other level. For some reason, once a month or so, Bruce and some other guys would turn our dormitory’s floor shower into a sauna. Everyone would bring their favorite beverage into the sauna and sit while our room would blare my latest mixtape. But, for some reason that I cannot give rhyme or reason to, we had to have a certain Talking Heads song on the tape. After a couple of random songs, you would begin to hear the famous opening bassline, which Bruce would always “sing”: “Bomp, bomp, bomp, ba bom, ba bomp, bomp…”, and we were off and singing with David Byrne, the Heads’ version of “Take Me to the River”. For what ever reason, they song will always remind me of a group of college men sitting in a make shift sauna and singing this song. It simply became a ritual.

Why I love that story so much is because Talking Heads are not known as a band that inspires unity. Au contraire, I found that the band is more about isolation than community. But, this unique cover version of an Al Green song brought together such a disparate cast of characters, making the memory out of a random act of stupidity. 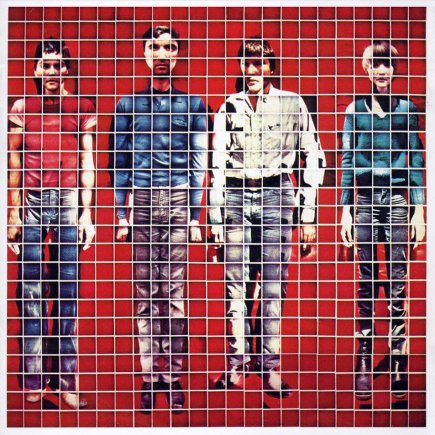 Yet, the rest of the album was something I mainly enjoyed on my own. Most of my friends were not ready for the music of my beloved Talking Heads. The first Talking Heads’ album I owned was the LP with “Take Me to the River”, More Songs About Buildings and Food. Being the son of an art teacher mom, I had an appreciation for the artist point-of-view, and I could hear that training in the music of Talking Heads. I mean songs like “The Girls Want to Be with the Girls” or “Found a Job” scream to me art students making music. Why? I cannot put my finger on it, I simply recognize a sensibility in the music that I remember Mom being taught in her Master’s-level classes (She would often bring me with her when the babysitter wasn’t available, and being something of a sponge, I soaked in the mentality. I also had my first experience in dealing with people of color and of different sexual orientation. I was really too young to understand what was happening, but the kind manner in which everyone treated me stuck with me forever.

Now, another thing I noticed on this album, the band’s second, is that they must have a love of early Seventies bubblegum music, because the Heads used the same simplicity in which they played their music. Yet, instead of the easy, free-following danceable pop music of bubblegum, the Heads stood the genre on its head, making the rhythm more jaunty. The other thing I noticed is that the band had a love of funk music. Once again, you would never confuse their music with that of Parliament or Rick James, yet the rhythm section contained a bouncy fluidity found in funk.

To top off the band’s sound, they used the futuristic squeaks and squawks of their keyboards and guitars that completely screamed to me, “We are former art students”. To me, this is the well from which they greatness came. No one in Talking Heads is a traditionalist when it comes to their music. Finally, we have originality in a band that lacked the pretension that I always felt Frank Zappa displayed, though I do love me some Zappa! Talking Heads were more for my mind than my booty. Yet, they will eventually figure out how to make people dance (1983’s Speaking in Tongues).

For purely selfish reasons, I wish Talking Heads would make amends for one tour during which they have to come to Indy so I can finally mark them off my bucket list. Still, they remain broken apart, which is a shame because few will actually sense the acrimony between the members of the band through their emotionally detached performances. Until then, Viva Talking Heads!