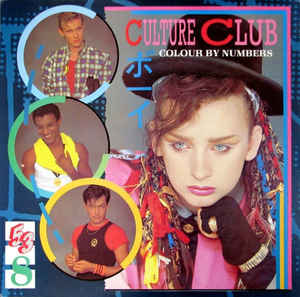 1983 was one of my favorite years for music. It’s nearly a perfect year in which the best music was also the most popular. Look, we were living through the days of Thriller, 1999 and The Police’s best selling album, Synchronicity. We had Def Leppard and Quiet Riot holding down the metal side, along with the debut of Metallica. New Wave was dominating the Hot 100 chart with the likes of Duran Duran, Dexys Midnight Runners and Men At Work. Even old stalwarts such as The Rolling Stones and ZZ Top successfully brought their music up-to-date with their respective albums Undercover and Eliminator. Even soundtrack albums were hot, like Flashdance.

The planets had aligned that year. I would like to think MTV had influenced this confluence of artistry, but I honestly think it may have run more simply than that. The big thing that everyone seemed to be doing was looking back to by-gone days of music, but updated the sound with electronic instrumentation. It’s like Kraftwerk was being mixed in with the blues (ZZ Top) or Motown (ABC). You could not turn on a radio to hear soulful music being mixed with synthesizers, drum machines, clap machines and electronic drum sets. Eventually, the soul would be driven out of the music by the end of 1984, but for a short period of time, the new sounds were invigorating and exciting.

Case in point, one of my favorite albums from 1983, if not my absolute favorite of that year, was Culture Club’s second album Colour by Numbers. The album was perfect in its execution of an updated Motown sound, with the use of organic instrumentation of pianos, saxophones, bass guitars, and guitars, while sprinkling in all of the synthesized sounds in the most tasteful and understated manner. And the instrumentation snuggled itself around the soulful voice of the incomparable Boy George, whose vocal likeness to Smokey was covered by the musical press, and his backup singer, Helen Terry.

Colour by Numbers kicks off with one of the Eighties’ most iconic songs, “Karma Chameleon”. One would think that an album would be crushed by such a strong song opening it, but that’s Culture Club’s secret weapon. The other nine songs are all strong enough to hold up that super opener.

In all honesty, I feel that every song on this album could have been a hit, though “It’s a Miracle”, “Church of the Poison Mind” and “Miss Me Blind” were the US hits in addition to “Karma Chameleon”. Once again, Motown is the sound that was being mined by the band.

If you were to listen to the album on vinyl, you would get the sense that both sides began with a mega-hit, with Side 2’s opening song being “Church of the Poison Mind”. But, both sides end with mega-monsters of emotion. Side 1 ends with a song that would not be out of place on a Seventies Elton John album, “That’s the Way (I’m Only Trying to Help You)”. It is a simple piano accompanying George’s voice until the halfway mark. That’s when the powerhouse vocals of the near-Aretha gospel Helen Terry provides counterpoint that enhances the emotional pain of the song. It is moment that would scare off the “would-bes” of The Voice. Then, there’s the closer on Side 2, called “Victims”. Once again, George goes back to the piano accompanying his jilted-lover vocals, which only enhances his isolation from his forlorn lover to whom he is singing. Now, this song used light string treatments to enhance its power as the band joins in. The irony of the band pulling against George’s vocals only creates more isolation during the song. This song is the perfect counter-point to the “Karma Chameleon” opener, during which Boy George was lyrically a little more optimistic about the relationship that his disintegrated by the end of the album.

It is often said that great art comes from great pain, and this is an album describing the breakup of a couple. And, that is a universal feeling we have in early, immature relationships, where the whole thing is spinning out of control toward inevitable destruction. And, Boy George takes us on this journey that we all understand.

Colour by Numbers by the Culture Club is a classic album that is beginning to be buried by time and distance and deserves to be rediscovered. So, if you have it, pull it out and listen to it. Allow the music to soak through your pores and into your soul in order to find the beauty as the lyrics enter your ears and conjure those old feelings of the past being lost. Then, remember, that your present is awesome as you came out of the fires of your teens forged into the adult that you are now.

Man, does this album ever make me philosophical. Plus, it’s just a terrific pop album!