I can’t believe that it is February 6, that the Super Bowl is over, and that we are moving into the last month of boys’ high school and men’s college basketball seasons (no offense to the ladies, because I really was a varsity assistant coach at the first school where I taught in the 90s). This coming Sunday, I will be making my annual snarky Grammy comments on Facebook for reasons unbeknownst to me. I just do it. I guess its my way of making up for KISS’ Destroyer album not getting nominated for Album of the Year in 1976 (I really don’t keep many grudges, but this one I do).

So, in keeping with Black History Month, I thought it would be kind of fun, though it turned out being daunting, to list the Top 100 Songs from Members of the Jackson Family, to honor Michael’s daughter, Paris, for her first Rolling Stone cover pic. The Jacksons are the most successful family in music history during the rock era. Their were nine children born to Joseph and Katherine Jackson, originally of Gary, Indiana. A tenth child died after birth. The first surprising fact is that I discovered that ALL nine Jackson kids have scored gold records. Rebbie, Jermaine, La Toya, Michael and Janet have all earned individual gold records, while Jackie, Tito, Jermaine, Marlon, Michael and Randy earned gold records as part of either the Jackson 5, while on Motown, or the Jacksons, while signed to Epic Records.

After consulting one of my favorite music websites, http://www.vfmusic.com, I compiled a Top 100 list for the Jackson Family’s hit songs. I did a little juggling to allow La Toya to join the fun, but I didn’t want to leave out the one true rebel of the family with one of her hit dance songs that was released in the wake of Michael’s overpowering of the music industry in 1984. After Michael crushed the world with Thriller, even La Toya, the future Playboy model of the family, got a singing contract. Now, this whole week is in celebration of the rock era’s first family of music: The Jacksons. Let’s begin the countdown of the Top 100 Songs by Members of the Jackson Family. 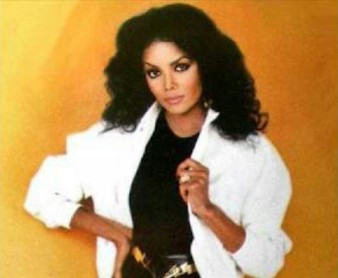 100. La Toya Jackson – “Heart Don’t Lie” (1984). When this song peaked at #56 on the Hot 100, La Toya became the final Jackson to actually rack up enough sales of this single to earn a gold record. This record proves how long and strong Michael’s coattails were back then.

99. Rebbie Jackson – “Centipede” (1984). Arguably, the sister with the best voice, Michael stepped in to write, produce and sing back-up on this great and former Dance Chart #1 record that propelled the eldest Jackson sibling to her only gold record. It had to be Jackson fatigue in 1984 that kept this song from being a bigger hit.

98. The Jackson 5 – “Little Pretty One” (1972). Didn’t they perform this song on their Saturday morning cartoon? If not, they missed the perfect vehicle for this tune.

97. Jermaine Jackson – “I Think It’s Love” (1986). Back in the mid-70s, when the rest of his brothers left Motown for Epic, he remained loyal to Motown. Why? Because he had just married Motown owner Berry Gordy Jr.’s daughter. Oops! He didn’t perform with his brothers until the ill-fate Victory Tour of 1984.

96. Jermaine – “Dynamite!” (1984). Never understood why this song was so popular with a title/chorus using a word made popular in the mid-70s by Jimmy Walker’s character on the TV show Good Times. Maybe that word made the song more timeless than I realized.

95. Michael Jackson – “Farewell My Summer Love” (1984). So, when Thriller blew up and there was talk of ALL of the Jackson men joining forces on a summer of 1984 tour, Motown must have felt they deserve a cut from this money train since they had originally discovered and nurtured this talent. So, Motown cleaned out this Michael Jackson vault, cleaned up this demo, and released this turd of a record on to the public hungry for anything Michael.

93. The Jacksons – “This Place Hotel” (1980). No where in the lyrics of this song does the title come up! In fact, the chorus mentions a “Heartbreak Hotel”, but the label thought this song would be confused with Elvis Presley’s song of the same name. In the words of Dr. Evil, “Riiiiiiight.”

92. The Jacksons – “Torture” (1984). Yes, this song WAS torture to listen to. By then, everyone knew Michael was saving his best material for his albums. So, Jackie had to come up with this song.

90. Janet Jackson – “Son of a Gun” (2001). Not really one of Janet’s better songs. Also, it was one of the first indications that Janet was losing her hot touch with music.

87. Michael – “Give in to Me” (1993). Was Michael trying to set a record at the time to release ANOTHER song from Dangerous?

86. Michael – “Butterflies” (2001). I think all of the child molestation charges were affecting his music, because 80s Michael would have buried this piece of smelly crap in his backyard then. Or, had The Jacksons record it.

85. Janet – “Go Deep” (1998). Janet told us that her The Velvet Rope album was the equivalent of Marvin Gaye’s Let’s Get It On. If this song is any indication, the comparison is wrong. Maybe, she should have given this song to her brothers for them to do.

84. The Jackson 5 – “Sugar Daddy” (1971). This song reminds me of the bubblegum music era. So, were the boys singing about the candy of the same name or La Toya’s future hubby? You make the call.

81. Janet – “The Pleasure Principle” (1987) #14. I LOVE this song! I can’t believe it wasn’t a bigger hit since the video showed a svelte Miss Jackson “practicing” her Paula Abdul-choreographed dance moves in a studio by her lonesome self. Still dig this song!

Well, ladies and gentlemen, we are at the end of today’s first 20 songs in My Top 100 Songs of the Jackson Family. I am not sure that a family as large as this one is as talented as this family. I would go out on a limb to state that no other family can match this one for their mental health issues, though sometimes I feel like I am a whole Jackson family rolled up into one crazy head. But, that’s another blog…NOT!