Back in the summer of 1977, as I was getting ready for my ascension to the top of the middle school heap as an eighth grader, I spent the summer training for the upcoming Cross Country season by running with a guy on the high school team. My class was considered to be “loaded” with distance running talent, so I think the high school coach had his upperclassmen runners match up with a middle school runner to encourage them and keep them interested in the sport.

In addition to running, Billy and I shared a love of listening to music. While running, we would talk about this group and that album. Since it was 1977, I was still a member of the KISS Army, and Love Gun was my favorite album. Billy, in an attempt to “broaden” my musical scope, would loan albums to listen to. I remember one day after a particular five-mile run, Billy loaned me his new live REO Speedwagon album called Live: You Get What You Play For. What hooked me was that he told me that one side of this “concert” album had been recorded at the old Convention Center in Indianapolis. I thought that was pretty cool since nothing cool but the old ABA Pacers played in Naptown, the old nickname for Indy.

REO had always been played on the big rock station of the Seventies, WNAP, 93.1 FM, “The Buzzard”. So, I was familiar with a couple studio versions of the songs on this album but never thought too much about the group. But, when this band played their music in concert, their performance was transcendent. This “live” album became a favorite of mine, though my younger brother hated the album being played all of the time. After he first expressed that, I had to turn my speakers toward the wall that separated our rooms and blared the album so he would hear it. Now, Mom was cool with my music but would object whenever I did this to my brother.

Anyway, I eventually bought this album on my own, though I traded it in for a punk or new wave album back in college. Recently, I started playing the CD again. And, these memories came rushing back to me. One big memory is when the high students who were DJs on the high school radio station played cuts from this album on the radio. Also, that same year, at the homecoming bonfire, the live broadcast was playing the football team’s song “Riding the Storm Out”, which, of course, sold the song to the middle schoolers who were at that event. In the fall of 1977, “Riding the Storm Out” could be heard all over my hometown.

Another song is something of an Indiana urban legend, especially at Ball State University in Muncie, Indiana. According to the legend, REO played the Muncie bars quite often while paying their dues on the club circuit in the early 1970s. The Ball State students became big and loyal fans of the band. So, according to this legend, the REO show-stopping song, “157 Riverside Ave.” was written in honor of the street on the Ball State campus that is called “Frat Road” there. Allegedly, the band played the frats so often there that they wrote the song in honor of the street. The downside to that legend is that the number 157 would put the house in the middle of the White River that flows through the college town. Frat doe NOT have a street number as low as 157, but the song made for a great story back in the 1970s and early-1980s.

As you know, although I am a huge fan of all kinds of music, my gateway music into rock was arena rock. In addition to REO, I listened to Styx, Journey, Boston, Foreigner, etc., though most of the time, that music left me wanting something more visceral. That’s why I was able to switch to punk, power pop and new wave so easily, since that music seemed to be more “real”. But, I still enjoy listening to my arena rock. And, there are very few great songs like “157 Riverside Ave.” and “Ridin’ the Storm Out”. They take me back to a more innocent time, back when sports and music could really take me away from the worries of finance, homework and politics. This was a time when my records were my best friends, who spoke to my soul whenever I felt like I was way too different than my peers. Music continues to teach me about people’s reactions to society. Although these records and CDs are no longer my best friends, they remain old friends who can transport me back to times while eliciting long-forgotten memories, like the few I spilled on you today. And, to me, that is what we all should hold dear about music and the arts. 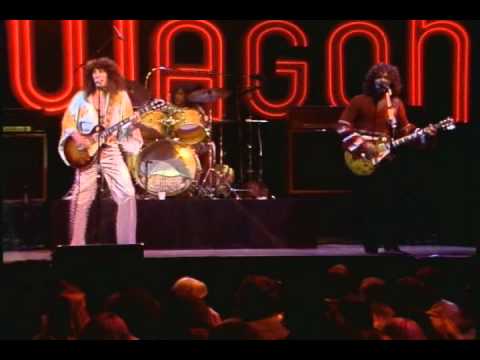 So, here’s to REO Speedwagon! And, more specifically, my first REO album, Live: You Get What You Play For! I’d like to thank the band and this record for helping me get through that difficult eighth grade year. May musicians continue to leave marks on young people’s lives throughout the ages.