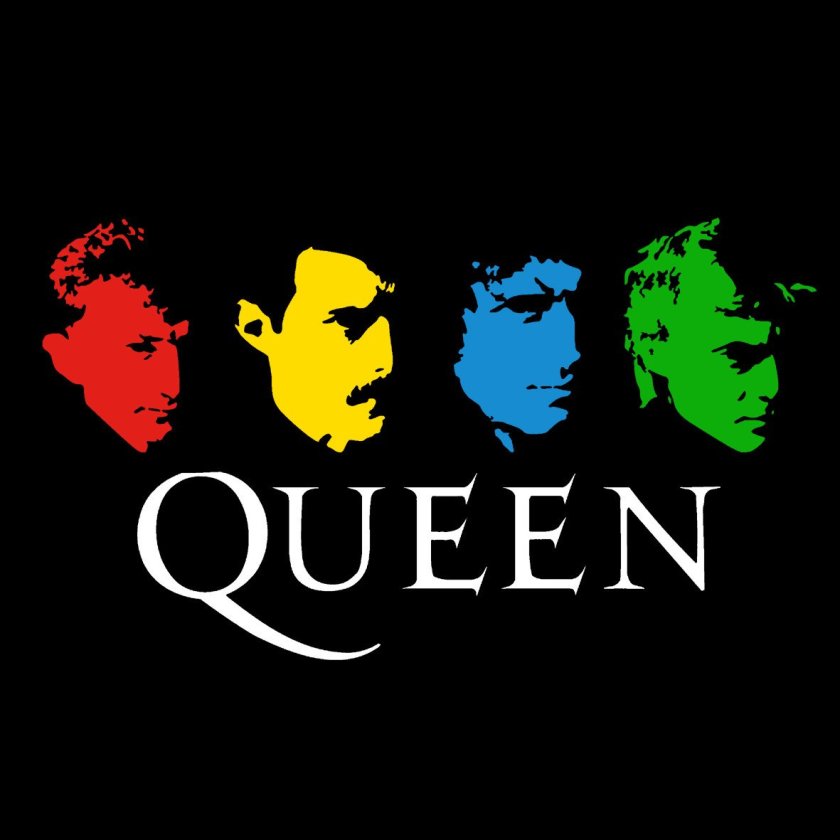 I think we have established that I am pretty much a pop-rock man at heart, though I do make forays into various other genres. For the past couple of months, I have been on a Queen kick. I am not quite sure what precipitated it, but I have been pulling out my vinyl music, of which I have all of the band’s studio albums, except for 1989’s The Miracle and 1994’s posthumous Made in Heaven. Redundantly, I have all of Queen’s albums on CD. So, if I want to listen to Queen’s majesty, I play the vinyl. Yest, if I am experiencing a “bad” pain day or am simply feeling lazy, I will play their CD so I won’t have to “flip” the album at the end of Side 1.

After listening to their fifteen studio albums multiple times over the past couple of months, I have compiled a list of my favorite 50 songs by Queen. I should have written the list on a white board since it was in constant flux. Songs kept moving up and down my chart. With a white board, I could have kept myself from wasting so much paper. So, now, after many revisions, far too many to count, I have come to to my conclusion.

With that said, may I present to you My Top 20 Queen songs of all-time. Let’s light this candle and get started.

20. “Flash” (Flash Gordon OST, 1980). I remember back when this song and album were released, I did not know what to make of this song. Now, 37 years after its release, the song has become one of my favorites. I am certain that Freddie would have LOVED the song’s use in the cheeky movie Ted,

19. “I Want It All” (The Miracle, 1989). In hindsight, it is understandable why this record sounds a little weary, as the band were working with Freddie while he was in the throws of full-blown AIDS. Still, this is one of the stand-out songs on the album.

18. “One Vision” (A Kind of Magic, 1986). It was around this time in my life that I began to ignore Queen for a few years. As a matter of fact, I did not get this CD until a decade later. I found out then what I missed. The band came out blazing on this song, a statement of unity as well as an anthemic statement of musical prowess. The best part about this song is the switching the lyrics at the end of the song from “One vision!” to “Fried chicken!” Queen has always maintained their sense of humor throughout their run as one of the greatest bands in the world.

17. “There Must Be More to Life Than This” [a duet with Michael Jackson] (Forever, 2014). This mid-80s collaboration had been long rumored, so when a compilation was being readied for release, the dark corners of Jackson’s and Queen’s respective music vaults were excavated and this song was finally uncovered. Though it sounds more like a Michael Jackson song in structure, you can pick out the members of Queen. What a shame that the song was not released during Freddie’s and Michael’s lifetimes. This song would have been HUGE!

16. “I Want to Break Free” (The Works, 1984). In 1982, Queen released the disco-rock album Hot Space, which I believe is an overlooked classic, as the rest of the world still calls it a turkey. So, the band was coming off their softest sales since their second album, Queen II. So, The Works was the band’s big comeback. Then they released the video for this song where the band appears in drag. Of course, middle America freaked out, and the band was history in the USA. What a shame, because this song is a classic.

15. “Now I’m Here” (Sheer Heart Attack, 1974). Early on in the band’s career, this song was used as a fun centerpiece, where Freddie appeared to “move” from side of the stage to the other as his vocals echoed. It was a cool special effect that enhance this great song into a transcendent live song in concert.

14. “Bicycle Race” (Jazz, 1978). Was this really a song? Sure it was, just turned up on its head. No other song at the time name dropped so many pop cultural references AND had a bicycle bells solo. Supposedly, the song was inspired by the Tour de France, yet, somehow, I believe their is some playful gay overtones that a straight man like me is probably missing. Personally, I love the song.

13. “You’re My Best Friend” (A Night at the Opera, 1975). The quiet and stoic bassist of the band, John Deacon, was always Queen’s secret weapon. Not only was he a supremely gifted bassist, Deacon was responsible for writing some of the band’s finest songs, such as this love song to his wife. The emotions Deacon was expressing are universal to couples throughout the world.

12. “Body Language” (Hot Space, 1982). This song was the big hit song from the album that is widely known as their disco album. For perspective, Queen had their biggest hit ever with the Chic-soundalike “Another One Bites the Dust”. Since the band was bigger than ever, they retreated to Berlin, searching for some anonymity and fun. The band decided to incorporate the dance sounds they were hearing in the discos within their grandiose sound. This fun ode to promiscuity was a hit, but the rest of the album was rejected by the rock world. This is the type of experimentation that David Bowie, U2 and Radiohead have dove into only to be hailed as visionaries. Yet, for some reason, Queen was rejected.

11. “Another One Bites the Dust” (The Game, 1980). This was Queen’s biggest hit song in the US and throughout the world. This is another John Deacon-penned song. I was fortunate because, the song had just been released as a single that week, so the band debuted this song live at the Indianapolis concert that I attended in the summer of 1980. It was great live.

10. “Crazy Little Thing Called Love” (The Game, 1979). This was Queen’s first #1 hit in the US. The band had been playing Elvis Presley’s “Jailhouse Rock” in the live sets for years. So, it was not a stretch for the band when Freddie approached them with this rockabilly song that predated the Stray Cats by two years in the US.

9. “Killer Queen” (Sheer Heart Attack, 1974). For me, this is the song that jump-started my Queen obsession. This is a typical Freddie song, in that the song allowed the lead singer to play up his flamboyance on stage in addition to on vinyl.

8. “Fat Bottomed Girls” (Jazz, 1978). Freddie, being the ornery man that he was, had his tongue firmly planted in his cheek as he wrote AND performed this song. This was a perfect song for Freddie to perform live.

7. “Tie Your Mother Down” (A Day at the Races, 1976). This fantastic rocker kicked off my favorite Queen album. This song used to bring college parties to boil when I would put it in my DJ sets. My buddies and I loved the lyric, “Tie your brother with a brick, that’s alright!”

6. “We Will Rock You”/”We Are the Champions” (News of the World, 1977). I just couldn’t separate these two songs; they simply belong together since they were released as a double-A-side single. They are the band’s calling card anthems, as well as the band’s gifts to championship athletic teams throughout the world.

5. “Radio Ga-Ga” (The Works, 1984). This song signaled a comeback for Queen in 1984. The power of the song was not really totally felt until the band’s show-stopping performance at Live Aid. Go to YouTube to watch the video to witness 100,000 fans packed into Wembley Stadium clapping their hands in unison like what was done in the video for the song. That’s how a band elevates an audience who in turn lifts the band to even greater heights. This song may be one of the band’s most underrated songs in their whole catalog.

4. “Don’t Stop Me Now” (Jazz, 1978). To the band’s fans, this song is one of Queen’s greatest mission statements. Unfortunately, in the US, radio looks at it as a very deep cut. Whatever, this song exudes the hedonism that Freddie must have been involved in as he lead the party wherever he was.

3. “Under Pressure” [a duet with David Bowie] (Greatest Hits, 1981). When I heard that Queen AND Bowie were working TOGETHER in the studio, I could not wait to hear the outcome. As the only new song on their first compilation released in the States, I was not disappointed. The song captured everything that I loved about the two artists. The song added to the mystique of Bowie and to the majesty of Queen. And, it barely cracked the Top 30 in the US! What a crime! The only bigger crime done to this song was when Vanilla Ice attempted to tell the world that “Ice Ice Baby” did NOT sample this song. In the words of Wayne Campbell (Mike Myers in Wayne’s World), “RRRRIIIIIIIIGGGHHHTTT.”

2. “Bohemian Rhapsody” (A Night at the Opera, 1975). So, who knew that a song that lasts over five minutes long, beginning with as a piano ballad, switches into an opera and ends as a heavy metal blow-out, would become one of the most iconic songs of all-time? You can actually hear this song as the divider between traditional sounding rock music, and an “anything goes/devil-may-care” approach to pop music At one time, this was the biggest selling single in the UK. In the US, the song had two Top 10 runs on the Hot 100 chart, going to #4 in 1975 and #2 in 1992, after the song’s use in the classic movie Wayne’s World.

1. “Somebody to Love” (A Day at the Races, 1976). So, how does a band follow up “Bohemian Rhapsody”? This time you let Freddie channel is inner Aretha Franklin along with a gospel choir of vocals made from the voices of the three singing members of the band (Mercury, guitarist Brian May and drummer Roger Taylor), much like the vocal overlaying done for the opera section of “BoRhaps”. On this song, everyone sounds more confident in what they were doing, in addition to their mastery of the studio wizardly necessary to make this song happen. Though no one can approach Freddie Mercury’s vocal acrobatics on this song, give a listen to George Michael’s version of the song he did with the surviving members of Queen during the concert honoring Freddie in 1993. He sure came close to Mercury.