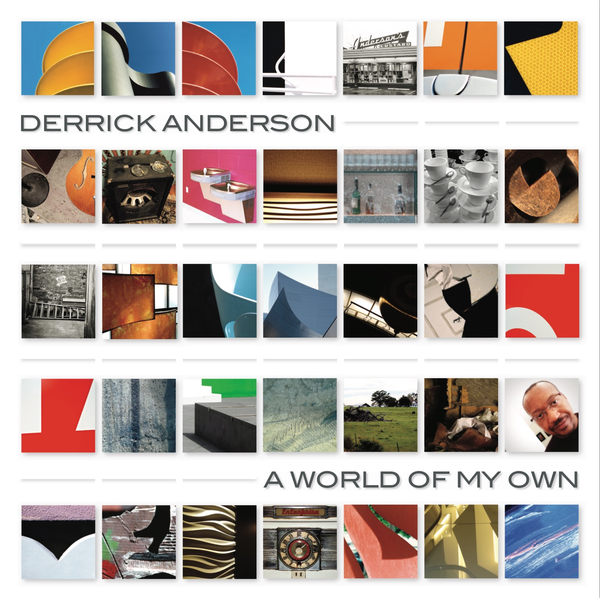 Hey! Can any of you fine people help me out here? I recently stumbled upon someone whom I will call the present AND future of power pop music. The man’s name is Derrick Anderson, and what I have discovered is that the man has been quite the fixture on the L.A. power pop scene over the years. Currently, the man holds the bass job with The Bangles after the departure of Michael Steele. Sometime during 2017, Anderson released his current album entitled A World of My Own. Here in the past month, this album has become my “go-to” album, the album I will to which I’ll listen when nothing else will do. If I had waited two more weeks before making my year-end Favorite 50 Albums for 2017, this very album would now be my number one album for the year.

First off, Derrick Anderson has written some fine power pop tunes in the finest tradition of Big Star, Raspberries and Todd Rundgren, better known as the triune god of power pop. Anderson’s first characteristic to pull at my heartstrings was he voice. He possesses a crystal clear voice that allows him to sound as if an angel were fronting an early version of The Who. His is smooth and unique and always sounds as if it were traveling from the happiest place on Earth, Derrick’s soul.

The next thing that grabbed me is his bass-playing. The man is sneaking in complex bass lines into songs from a genre not really known for its bass play. Yet, Anderson continues to amaze and enthrall me with his use of soulful counter-melodies that rarely finds its way into the power pop genre. Anderson’s bass playing helps the album transcend its genre.

Finally, Anderson has written some of the finest songs of 2017. This album is power pop instant classic. But, why should I be surprised? The man released this album on Omnivore Recordings, which only solidifies that label as the finest connoisseur of power pop tastes, past, present AND future. And, Derrick Anderson must be one of their most important artists for the present and future categories.

Throughout A World of My Own, Anderson gets help from many legends of power pop, such as the late Tommy Keene, members of The Smithereens and Bangles (of course!), Matthew Sweet, Steve Barton of Translator and members of Sixties pop icons The Cowsills. I cannot emphasize that this album is nearly perfect. And, it’s been a VERY long time since I have made that claim about an album.

The album kicks off with the poppish gauntlet throw-down of “Send Me Down a Sign”, followed by the harder rocking “Waiting for You”. The latter song may remind you of a Smithereens’ song since the whole band provides their signature vocal blend on the chorus, helping boost the song into the heavens. But, the album differentiates itself from the usual power pop album with the third song, the Squeeze-like “You Don’t Have to Hurt No More”. This song has a typical strong melody with great lyrical wordplay, the kind that Squeeze has made a career doing. But, it is Anderson’s bass that takes the song to a whole new level. You have to hear it to believe it.

Of course, whenever you can employ the members of the Bangles for some help, those songs will shine. On A World of My Own, those songs happen to be “When I Was Your Man”, where Vicki and Debbie Peterson join Kim Shattuck of the Muffs, Pandoras and Pixies, to push this song into overdrive. I could just hear this song being blasted from cars during the summer cruising season. Of course, that might be a scene from the past, yet it is still such a pleasant thought that I may have to do just that this coming summer.

The other song with a Bangles’ feel is “Something New”, during which Susanna Hoffs joins the Peterson sisters for a song with a definite Bangles state-of-mind. This song would have fit perfectly on the Bangles’ last album Sweetheart of the Sun.

The other highlight is the shortest song on the album, “Happiness”. Clocking in at a minute-forty-two, “Happiness” has such a glorious sound, probably due to the guest appearance of power pop god Matthew Sweet. Regardless, Anderson has yet another gem of a song on this album.

Still, A World of My Own is easily the best album of 2017, and, quite possibly, for the whole 2010s as a decade. You might have to dig to find this one, but believe me, if you love your rock to have great melodies, then Derrick Anderson has the perfect album for you. A World of My Own makes me believe it has to be summer somewhere.