In the 21st Century, I am not sure what record companies are trying to do to stay alive. Most of the time, they seem to be somewhat sticking to their old way of doing things: sign some artists, record a single with some big named produced written by some hot songwriter, throw the song on iTunes and wait to see if it connects with an audience. If it does, AND the song becomes a hit, we are on to the album stage. If not, that artist is discarded.

Back during the pre-internet era, when record companies ruled the roost, they would sign an artist and give them three albums to develop. Current CEO of Interscope Records, the great Jimmy Iovine made a career out of recording third albums for artists, as he was involved with Springsteen’s Born to Run, Petty’s Damn the Torpedoes and Patti Smith’s Easter, albums that all commercially broke these artists to the general public. He said that this album was the most important album in the artist’s career, and he appears to be correct.

Now, back on New Year’s Day 1983, a little known Irish band by the name of U2 released their third album called War. Immediately, the critics were singing the praises of this band whose sound was different from most other commercially successful artists. Instead of blues-based rock that had been the main diet of rock music for nearly 20 years, U2 instead took punk’s minimalism in playing notes and letting the feedback paint the picture within the context of their songs. This was very much a post-punk technique that actually could be traced back to the music of Captain Beefhart, the United States of America and Yoko Ono from the Sixties. Those artists were all challenging the preconceived notions of what was acceptable for rock music. And U2 learned those lessons second-handed, though their shared admiration of Joy Division and Public Image Ltd.

U2’s genius was putting those controlled feedback guitar noises to paint aural textures within the confines of a pop song with real pop melodies that changed everything for Generation X and alienating most Baby Boomers along the way. U2’s sounds became the “IT” sound for the next decade. Record companies began scouring the United Kingdom, as well as the rest of the world, for the next U2, much as they previously searched for the next Elvis Presley, Beatles, Dylan, Hendrix, Zeppelin, Clash and any other transcendent artist. Often, the next transcendent artist is making music completely in isolation until all of a sudden they seem as though they had popped up fully developed over night.

In the aftermath of U2’s 1983 success, bands with similar anthemic sounding songs became something of a small point of emphasis to discover. During that small window, some terrific bands popped up, such as Simple Minds (known for their huge 1985 hit song “Don’t You (Forget About Me)”), Big Country (“In a Big Country”), and, probably the least known of the trio, Scotland’s The Waterboys. 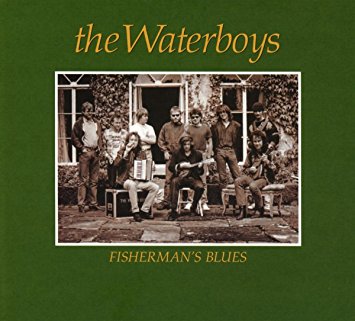 I once read that The Waterboys were actually Scotland’s answer to U2. I am not sure if Mike Scott and his mates were cognizantly thinking that way, but there are some similarities in that both attack a song the same way. The difference lies in Scott’s willingness to incorporate flourishes of R&B with a sax here or a screeching Irish fiddle there, as well as the alacrity to fully lose their sound in other genres, like they did on 1988’s classic album Fisherman’s Blues. And as great and enjoyable of an album that one is, I have come to play the band’s preceding album, 1985’s This Is the Sea, more often recently. 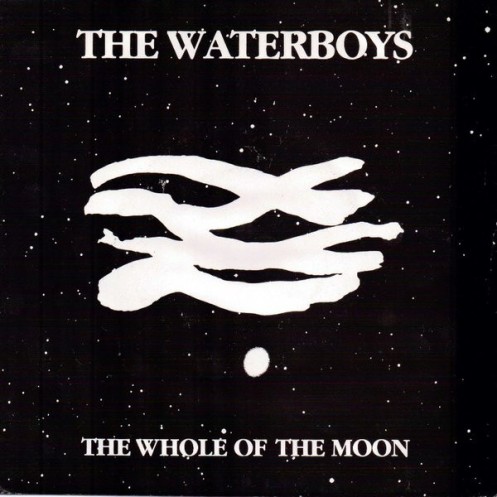 Now, thirty years later, I remain blown away by the arching beauty of the second song on the album called “The Whole of the Moon,” the calling card of their career. I can honestly admit that the song had been buried for a good thirty years in my memory until my wife, Son #1, his wife and me went to see, ironically enough, U2 last fall. U2 likes to play a song as they make the long walk from their dressing room to the stage before beginning their concert. Back on their 360° Tour, they walked out to Bowie’s “Space Oddity”. But, this time, they walked out to this majestic song by The Waterboys, which really acted as a John the Baptist type of song to U2’s rock savior Jesus Christ-like The Joshua Tree. Throughout The Waterboys’ This Is the Sea, Scott describes his heroes being transformed by the music of rock and roll. It’s almost as if The Waterboys, and not U2, are from the same Irish rock lineage as Van Morrison. And, maybe they are.

The Waterboys should have been more palatable to the Boomers’ tastes in music than U2. But, for whatever reason, radio programmers would not touch them. It was as if they allowed U2 radio airplay, in addition to a little to Simple Minds and Big Country, but that was it. Instead, we got every half-assed, same-sounding hair metal band on the Strip like Warrant, Winger and White Lion (nice alliteration, eh?), instead of a bigger-than-life band like The Waterboys who were celebrating things like learning, love and peace instead of rolling the dice in a play of Russian Roulette against HIV, as our hair metal idiots were playing with strippers and heroin addictions. To this day, I remain in awe in how that happened on radio, even though the medium was losing money way back then.

So, allow me to reiterate that if you want to discover a gem of a band from the Eighties, then my big suggestion is The Waterboys, especially the two aforementioned albums. Those are the two albums where The Waterboys sound as if they are ready AND willing to ascend to the top of the rock mountain to save us from the posers of the day. And, This Is the Sea is their third album, so that desperation is clear. Shortly before the recording of this album, the never-ending revolving door membership to The Waterboys started. Most significantly, multi-instrumentalist and fellow songwriter Karl Wallinger left the band, which allowed him to start his solo career under the banner of World Party, another anthemic band that should have been much more popular than a simple footnote in rock history.

Last thing, did you hear that Lindsey Buckingham, the producer and creative mind behind many of Fleetwood Mac’s greatest albums from the 1975 eponymous album up until recently, was fired from the band. Some exciting word is that Tom Petty’s guitarist, the fantastic Mike Campbell AND Crowded House (“Don’t Dream It’s Over”, “Something So Strong”) mastermind and former Split Enz (“I Got You”, “Six Months in a Leaky Boat”) guitarist/singer Neil Finn have been added to the Big Mac as a change to their “special sauce.” For my money, though the band will obviously miss Buckingham’s studio wizardry, Fleetwood Mac may actually become stronger with Campbell’s outstanding soloing ability and songwriting and Finn’s left field pop sensibility. I am actually excited about hearing how these changes affect/help the band. Maybe, especially with Finn’s songwriting ability, the Mac will rise once again to be the hitmakers they once were. I am truly excited by this change. Could the Mac be adding more Heartbreakers in the future? Maybe keyboardist master Benmont Tench could also be added to allow Christine McVie a break and/or enhance the band’s keyboard sound. Regardless, there are some exciting times ahead for Fleetwood Mac in the next future.