Back when I went to college in the early Eighties, Ball State University was still on the quarter system, which was great for this attention deficit guy since classes went by rather quickly. Plus, when you are taking classes such as Developmental Biology, Qualitative Analysis and any class with Organic Chemistry in the title, you want them to end as quickly as possible. If I had only discovered the joys of summer school courses earlier in my academic career, my GPA would have been 4.0. Oh well, my GPA was fine, plus I was never really motivated by that thing. Truth be told former students of mine, most things outside of the lab was so mundane to me, so I was a classic academic underachiever. Actually, I had an Immunology professor call me out on it one time after an exam. But, that’s neither here nor there, as I digress. 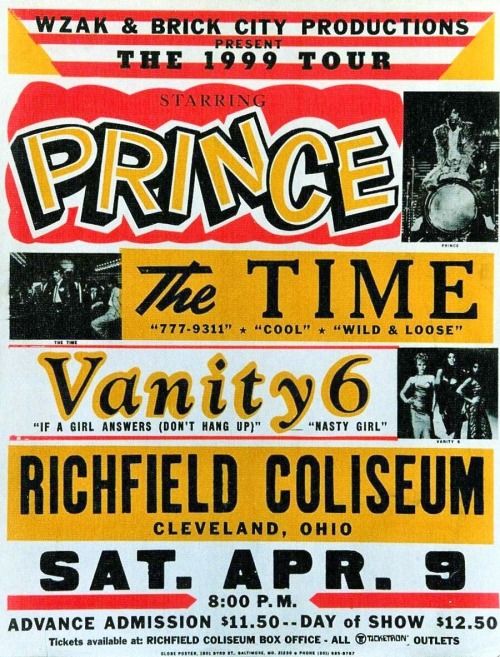 Now, where was I? Oh, right! Back in college…uh…right! Okay, it was February 1983, about two weeks before Spring Break started when I got my latest issue of Rolling Stone. Unfortunately, the magazine was beginning its slow decline from its Seventies heyday to the watered down shell of a magazine it is today. Regardless, this particular issue was celebrating the winners of the Readers’ and Critics’ Polls for 1982. And, if my memory serves me correctly, the critics of this once great source of American music information had chosen Prince as their Artist of the Year, not simply for his first double album classic 1999 and all the hit singles that sprang forth from this album, but how Prince had begun a stable of great artists with The Time and Vanity 6 and their albums and singles. Prince’s Minneapolis Sound was something of a mini-Motown.

Now, Prince had written and recorded most of the tracks on these two groups he formed as an outlet for different sides of his songwriting. In Vanity 6, he had a all-female vocal trio in the mold of the Supremes who could rock the feminine side of his songwriting, giving voice to these strong women characters Prince had developed in his mind. And, with The Time, he had his funk band that would become exceptionally popular with an African-American audience. At this moment in time, it appeared that Prince was poised to dominate four markets with these two artists along with his solo material: pop and rock (himself), R&B (everyone) and dance (V6, The Time). And, artistically speaking, from what I was lead to understand, these three bands took to the road in a dominating tour de force of Prince’s visions come to life. People who saw shows on that tour claim to me that those shows were their favorites of his career.

That school year, around campus, you heard those three artists all over the place, as they were all difficult from which to hide. Of course, of those three albums, I still regard 1999 as the masterpiece. And, since so much has been made about that album over the years, I would prefer to focus upon the other two, since each are nearly as stunning as the Purple One’s second masterpiece in his own solo career. What has been forgotten, or at least under-reported over the years, is how fantastic these other two albums from Prince’s proteges truly are. And, I am talking about What Time Is It? by The Time, their sophomore release, and Vanity 6’s self-titled debut album, both of which were “Arranged & Produced by The Starr Company,” or Jamie Starr, aka Prince. As for the backing band for Vanity 6? That’s The Time!

Let’s begin with Prince’s funk alter-egos, The Time, and their second album, What Time Is It? Unfortunately, this album represents the last recording that the original lineup of the band is intact, that is until 1990’s comeback Pandemonium. Obviously, the visual focal point was always Prince’s childhood buddy, Morris Day and his pimp-about-town persona, along with his personal “valet” Jerome Benton. However, the musicians of the band are loaded with several men who were on the cusp of their own stardom, such as keyboardist Jimmy Jam and bassist Terry Lewis, the masterminds behind the Janet Jackson explosion of the Eighties; second keyboardist Monte Moir, who left with the more famous Jam and Lewis to aid the duo in production; guitarist Jesse Johnson, who will have his own solo hits in the mid-Eighties, and who should be a major influence on young guitarists today but seems to be overlooked today; and drummer Jellybean Johnson, who will join The Family for its lone eponymous album, only to return to The Time when they regrouped in 1990. After this album, Jam, Lewis and Moir will exit the band, to be replaced by others when Purple Rain, the movie, is released. 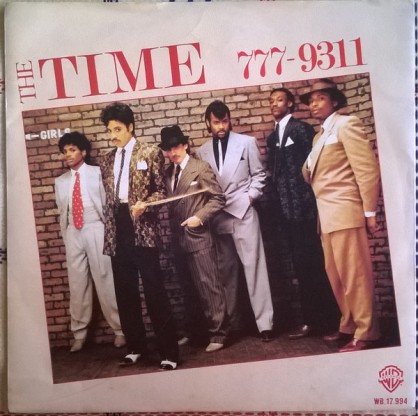 After opening for Prince on his 1981 Controversy Tour and behind their own self-titled debut, The Time played themselves into one of the tightest funk bands of their time. Night after night, the group improved. And, that jelling of the band can be heard on What Time Is It? At a time when George Clinton took the funk into drug-induced spaced-out reaches of funk-rock with Funkadelic and horn-based funk with Parliament, which taking da funk on extended excursions, The Time represented something of a throwback to the tightly woven funk sounds of Sly & the Family Stone and James Brown himself within pop constrictions.

Although pop hits eluded The Time from this album, the first single, “777-9311”, peaked on the R&B Singles Chart at number two, while the follow up single, the now-classic “The Walk”, stalled out at number 24. My own introduction to this album was through “The Walk,” as it got played all over campus during Fall Quarter 1982 and throughout the rest of the 1982-83 school year. As a matter of fact, the best air jam performance I have ever seen was a group of guys performing “The Walk”. All in all, What Time Is It? is an Eighties funk classic, while I will go to my grave arguing that The Time is Rock & Roll Hall of Fame-worthy on their own merits, as well as being the backing band for Vanity-slash-Apollonia-6 and for the band members’ individual influences post-Time.

Now, the first album released during this torrent Minneapolis Sound attack of 1982, was the self-titled debut album of Prince’s all-female trio, Vanity-6, led by Prince’s then-girlfriend Denise Matthews, or Vanity as we knew her. Originally, Vanity was to be called “Vagina” but Matthews nixed that one. As you may or may not know, Vanity preceded Prince in death by two months during that horrible run of rock star deaths that commenced with the Christmas 2015 death of Motörhead’s Lemmy and ending with the surprising death of George Michael on Christmas a year later. 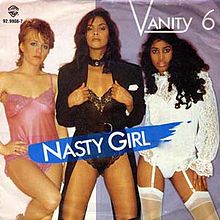 Vanity-6 was Prince’s feminine side come to life. The album sounds much like Prince’s 1981 classic Controversy, at least sonically. This album was meant to prime pop radio for Prince’s next album’s arrival later in 1982. Vanity 6 has strong material, just as The Time’s album has. Unfortunately, neither MTV nor Top 40 radio was ready for this canny mixture of pop, rock, dance, R&B and new wave, or else Controversy would have been huge. Still, this album has notable songs. First, there is “Nasty Girl,” a song that has been used in films at strip clubs and dance clubs in order to evoke a heavy Eighties dance feel. Or, as the raters on American Bandstand‘s “Rate A Record” segment would say, “It’s got a good beat, and it’s easy to dance to!”

The next single is a lost new wave classic, since the song was recorded by what had been labeled as a dance group, called “He’s So Dull”. This song would have been just as comfortable on a Josie Cotton album as it was on here. The third song that sticks in my memory was the synthpop “Drive Me Wild,” thus proving Prince’s mastery over all things rock, as he was obviously in touch with all types of popular music back then. 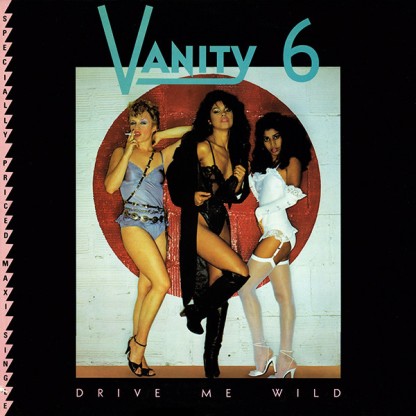 A mere two months later, Prince would drop his commercial breakthrough album 1999, as he prepared a two-year plan that would make him the biggest star on the planet. But, his first run of proteges have ended being his best, in addition to being his most enduring, as well as endearing. Plus, these two albums made college women want to wear lacy camisoles in the Eighties. What could be better than that?