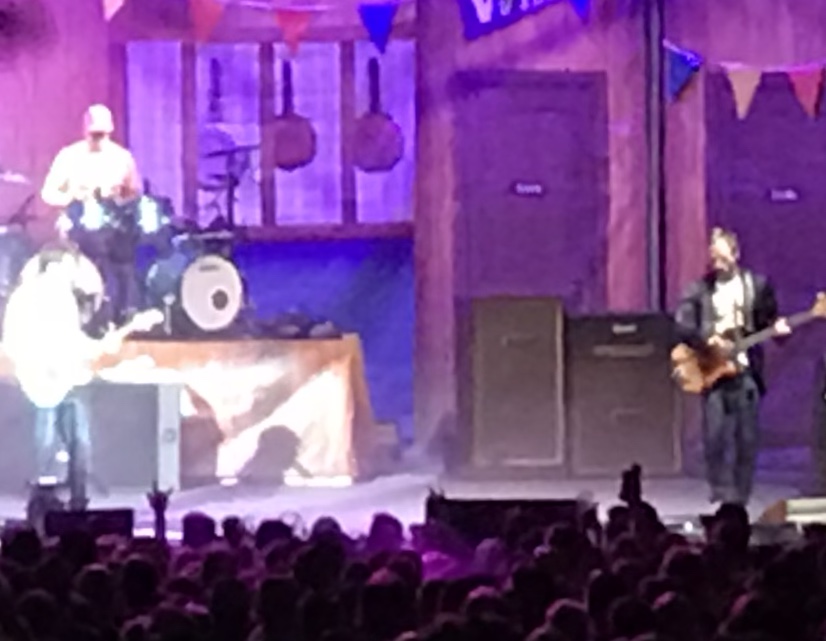 My boys and I finally got a day in our schedule coordinated so that we were FINALLY able to go together to see a concert. Now, you may be wondering what band or bands could possibly bring us all together, especially now that R.E.M. have retired? In reality, it took two bands actually coming together on tour to central Indiana’s weak concert market that would interest the Keller boys? Keep in mind that I am in my mid-Fifties, while the boys are in their early-Thirties and late-Twenties, so consensus can be difficult. Yet, when we found out that one of our favorite Eighties alternative bands, Pixies, teamed with Weezer for a tour, it was a match made in heaven for the three of us. My boys actually grew up listening to Pixies’ classic album, Doolittle, on vinyl I might add, while their childhood is filled with the music of Weezer. And, I loved the fact that Weezer seemed to fill the Cheap Trick role in my boys’ lives much as Cheap Trick had done for me, bringing the screwed up view of teen life alive with the sounds of powerful power pop.

By the way, the concert was everything that I had hoped it would be. The concert began with a short set from The Wombats, who were okay. Then, the Pixies entered to a solid sound of applause, though many sits were empty. The set that Pixies played seemed to be arranged as a reminder of the band’s legacy, as if it were a wake-up each night to the tone-deaf voting committee of the Rock & Roll Hall of Fame. If the committee is hellbent on putting in popular bands, then they had better begin recognizing the contribution of the Gen X artists, such as Pixies, who came out with guitars a-blazin’. Pixies were a sound to behold, as masterful feedback sounds emanating from guitarist Joey Santiago’s raging guitar brought intensity to Black Francis’ abstract lyrics upon a melodious bed, all the while one of rock’s finest rhythm section of drummer David Lovering and bassist Paz Lenchantin set the bedrock bottom end. The band’s whole set was a reminder not only of the band’s power, but also their sheer genius and influence upon a generation of artists, beginning with Nirvana.

Then, Weezer entered with “Buddy Holly,” complete with a background set reminiscent of the Happy Days set of the song’s classic video that broke Weezer wide open back in 1995. Today, that first eponymous album, known as the “Blue Album,” for its blue background, is considered a classic album, and it’s reputation seems to be growing as the years go on [Remember, the Blue Album is 25 years old in 2019! Anyone else feel old?]. And, all night long, Weezer just played the “hits,” or at least all of the songs that made them the best power pop band in the game today.

I feel as if Weezer were also reminding those RRHOF voters of their greatness as a band  on this year’s tour. Weezer is eligible for election for this upcoming induction in 2019, so who can blame the band for that attitude. The second part of their set utilized a garage background that allowed the band to get back their beginning. And, still, the hits kept coming. Then, as a change of pace, lead singer/lead Weezer Rivers Cuomo went halfway into the amphitheater, which was only eight rows from our seats! For the first time in my life, the stars got close to me. From this vantage, Cuomo sang two acoustic songs as the rest of the band kicked back and rested. The songs were “Island in the Sun” and a cover of a-ha’s New Wave classic “Take on Me.”

Upon completion of the mini-set, Rivers made his way back to the stage, where the band finished in full rock band mode with the usual rock star stage set, including their Van Halen-slash-Wonder Woman influenced “W” symbol lit up behind them. The whole concert, which was a Weezer version of Neil Young’s Rust Never Sleeps Tour with their background changes, was a pile-driver of a concert.

Well, now I have one concert down this week, with one more to go later on. My wife and I are going to see an odd line-up this week as Styx is headlining Joan Jett & the Blackhearts supporting and hair metal weaklings Tesla in the opening slot. Personally, I am excited to see Joan perform again, though it’s been since 1982 since I last saw her. Plus, I saw Styx way back in 1979! Tickets were MUCH cheaper back then.