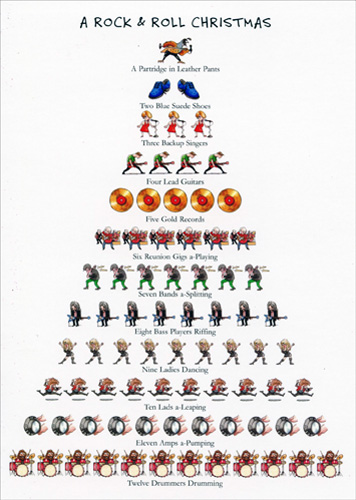 Back in 1987, A Very Special Christmas was released in the US, reigniting modern takes on Christmas standards a commercial reality. Now, there is a glut of modern Christmas music that can be purchased. Still, that album did kick off a second golden era of Christmas music. The Fifties and Sixties proved to be the first golden age, while the Eighties and Nineties combined to be the second golden age. Now, in the 21st Century, you can find many country and pop artists releasing holiday albums, most of which are just tired remakes of those songs from the Eighties. Seriously, who else needs to record Wham!’s classic “Last Christmas”?

Instead, I dig deeper for my current Christmas music. But, as I do that, I have been discovering fewer and fewer worthy candidates for my personalized mixes that I hand out each year to my friends. I have found that the power pop genre contains some of the best holiday music, with hip hop right behind. But, pop, classic rock and country artists are releasing uninspired holiday hits. Still, I have found some recent winners that may one day make this list.

Anyway, let’s get on with the countdown.

80. James Brown – “Santa Claus Go Straight to the Ghetto” (1968). The Godfather of Soul released not one but two classic Christmas funk albums in the Sixties.

79. Bob Dylan – “Must Be Santa” (2009). I am NOT kidding! Bob Dylan really did release an album of Christmas music in 2009. And, it is exactly what you’d think it would be. And, this is the most fun Dylan probably ever had in the studio recording a song.

78. Josè Feliciano – “Feliz Navidad” (1970). Does anyone else really remember that the Sixties and Seventies really did embrace cultural differences? I’m not kidding! I really don’t think Santana would ever have become successful in these political winds, never mind this Spanish Christmas song.

77. Isaac Hayes – “The Mistletoe and Me” (1969). And did you really think some of our favorite artists would NOT take Christmas into the bedroom? You bet those classic soul artists of the Sixties and Seventies did! And, surprise, surprise, the R&B artists of the Forties and Fifties started that.

76. Sharon Jones & the Dap-Kings – “Ain’t No Chimneys in the Projects” (2011). We just lost Miss Jones to cancer a month ago. She was a classic soul singer, and we were just getting to enjoy her talents. Her last album is a compilation of all of her Christmas songs, including this brilliant sociological critique.

75. Elvis Presley – “Blue Christmas” (1957). Yes, the King extended his domain into Christmas songs, carols and hymns. The man could do it all. And, this is the song he is known for.

74. The Jackson 5 – “Frosty the Snowman” (1970). When Michael and his brothers first arrived on the scene, they finished off the year with their own Christmas Album, which was a classic album in its own right. And, this song was one of the more fun songs of them all.

72. Lady Gaga featuring Space Cowboy – “Christmas Tree” (2008). This was released near the height of Gaga-mania. On the surface, it’s a nice entry into 21st century holiday music. But, upon closer listen, the song is nothing but a double entendre. And, why should we be surprised by that?

71. Willie Nelson – “Pretty Paper” (1979). I had a difficult time trying to decide between Willie’s version or Roy Orbison’s as my favorite. Personally, I love how laid back Nelson sounds on this song. I also love Willie’s instrumental cut from his Christmas album called “Christmas Blues”, not to be confused with Canned Heat’s song of the same name.

Now, we are 30% of the way through my list of my 100 favorite Christmas songs of all time. Once again, a big thanks to HERC for supplementing my blog with samples of the songs on my lists. The man is a god among rock bloggers.

2 thoughts on “On the Third Day of Christmas: Numbers 71-80 of Keller’s Top 100 Favorite Christmas Songs”