Go ahead! Call me a “Johnny-Come-Lately”. Or, just call me old and WAY behind the times. I get it. I am not always on the cusp of music, especially while my boys were little and I was back in college in order to change careers from a Medical Technology, one who runs diagnostic tests on the fluids from the human body in a hospital laboratory setting to become a high school chemistry teacher and track/basketball/cross country coach. During that time up to my retirement, music took a back seat to my boys and career. Plus, when you coach high school varsity athletic teams, it takes up most of your waking hours. So, lately, I have been making an effort to learn about the music I missed in the Nineties, especially the Britpop stuff that did not really make a dent here in the States.

Of course, one of the first CDs I bought was the landmark Stone Roses’ eponymous debut album from 1989. Then, it was on to Oasis, Blur, Saint Etienne, My Bloody Valentine, Supergrass, Primal Scream, etc. As a matter of fact, I just recently purchased the 2011 remaster of Primal Scream’s 1991 masterpiece Screamadelica and have fallen in love with it as if I were living back in 1991. The album sounds as fresh today as it would have when it was released. As a matter of fact, this album absolutely sounds timeless.

I love it when an artist or band takes chances with their music and hits a home run in the process. That is what happened during the creation of this album. The band seamlessly melded their disparate musical interests into one of rock’s most enduring pieces of work. Primal Scream, at the time was a relatively unknown band outside of its native United Kingdom. Even their first couple of albums did not anticipate what they would do on Screamadelica. The band took their love of the Rolling Stones, Motown, funk, hip hop-like samples, punk, 60s psychedelia and pop/rock music, stirred it all together to birth 11 anthemic songs.

The standouts are the two popular hit singles over in the UK: “Loaded” (track 7) and “Come Together” (track 6). Those two, when viewed together combine to tell the public that Primal Scream is a rock band who will make you want to hit the dancefloor without sacrificing fans from either genre. The boys also throw in samples, which, in 1991, was pretty much unheard of. At times, you can find some old school hip hop rhythms holding down the bottom, all the while the top is nothing but dirty Stones-ish blues-based rock. And the whole thing on these two songs is a heavenly mix.

But, unlike other albums where the promise of a great single or two is not matched by the album, Primal Scream was able to maintain the high level of songwriting, skillful playing, urgent playfulness and blinders-on confidence in their muse. In other words, Primal Scream made an album that will always rival Nirvana’s Nevermind, Pearl Jam’s Ten and Temple of the Dog’s self-titled debut album for 1991’s best album released that year. Now, that’s high praise. 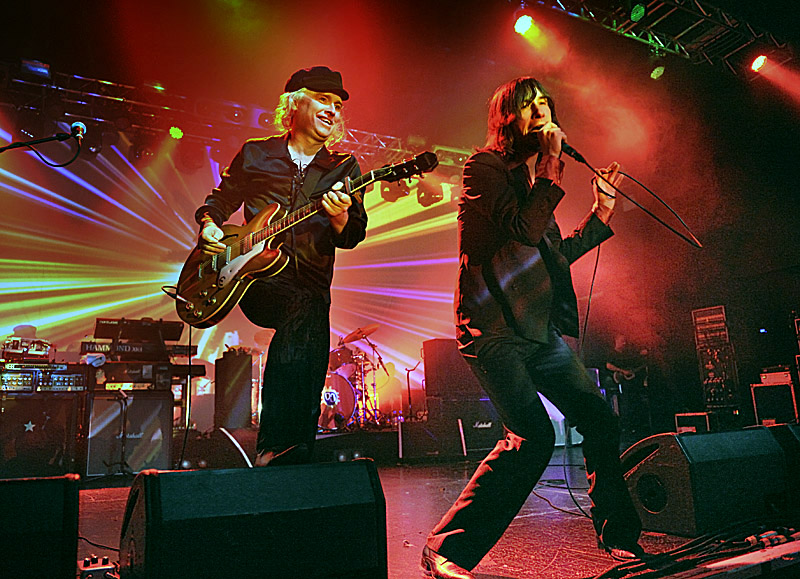 But, I think what may put Screamadelica over the top is the excellent ballad “Damaged”. It is the kind of ballad the Rolling Stones used to make in the Seventies, like a long-lost cousin of “Beast of Burden”, “Angie” or “Fool to Cry”. It has the very same emotional depth of those examples as well as an excellent bass line and an emotional guitar solo.

The other standout track on this album that is full of terrific songs is the album opener, “Movin’ on Up”. “Movin’ on Up” is Primal Scream’s anthemic call-to-arms song that tells the listener that this band is ready for the big time and they are going for it immediately. Immediately, the band marries those hip hop-ish rhythms to a Stones/George Michael’s “Faith”-feel rock song, along with a gospel choir and a roaring guitar solo, to make something new and fresh. Immediately, the listener is drawn in and can lose him- or herself in the music, picking out some Summer of Love touches here, some MC5 power there, and a whole lotta love everywhere. The song is basically everything that I love about great rock music.

I just wish I had discovered this album back in the day, so I could have been enjoying it for nearly 27 years. However, Screamadelica reminds me of everything I ever loved about music. I am just happy that I found the album at all. I may have a hard time ever taking this CD out of my player.

See? I can still get the thrill of discovering a new-to-me album, even at my age. Cheers to Primal Scream for giving us Screamadelica. I MUST get this album on vinyl.