This morning, I had NO idea what I was going to write about. After a weekend where I saw Chicago play their iconic second album in its entirety, I must admit that I was still a little hooked on the great musicianship of the members of that band. I only wished that I would have appreciated the band during their heyday, but I bought into the incorrect myth that they were strictly a ballad band. After all, they were still an underground band when they recorded that famous second album, technically known as Chicago, as they had changed their name from Chicago Transit Authority, the name of their first album. However, in the intervening years, everyone, including the band, has come to refer to the album as Chicago II. For me, when I see such a moving concert, it takes me awhile to go back to my general collection.

So, after many starts and stops, I decided today would be the day that I tackled the Eurythmics, another band that began in the underground, only to hit the big time and evolving into a hit machine. Here in the States, I feel as though Eurythmics have never been given their due as a band. Yes, they began at the same time as MTV, so they have been eternally considered a new wave/video band here, and nothing more. The only thing is if you continued to follow them during the years after the huge hit “Sweet Dreams (Are Made of This),” then you have got to listen to a band that evolved into the best duo this side of Daryl Hall & John Oates. As they evolved, they relied less and less on the synthesizers that some many Americans associate with them due to that first mega-hit of their. By the time they took a nearly decade-long break through the Nineties, the world had literally forgotten the catalog, sans that one great song that I have all ready mentioned.

What I have always loved about Eurythmics is the underlying soulfulness of the band. Even during that initial burst of synthesizer-based music they created initially, singer Annie Lennox’ soulful vocals separated them from the rest of the synth-pop bands. Of those bands, often the more interesting bands juxtaposed either a soulful or operatic singer against the detached, icy feel of the synthesizer music on which they sang. Bands like Yaz (or Yazoo), Soft Cell and Erasure all fall in that category. But, what separated the Eurythmics from the other synth-poppers was musician/producer/songwriter David Stewart’s talent in all three categories, as he was able to lead the band from the icy world of electronica into a soulful STAX-era type of pop music with nods to rock and adult alternative music. It was a subtle transition, but it happened over the course of the band’s initial eight-year run from 1981’s release of their debut album In Your Garden to their final album of the Eighties, 1989’s We Two Are One, before taking their extended break that lasted until 1999, with the release of what has become their last studio album, Peace.

However, one only needs to travel back to listen to the pair’s Eighties output to understand just how important the Eurythmics are to the history and development of rock music. In the beginning they were able to demonstrate that this new synthesizer-based soul could sound human, but also evolve into a band that incorporated traditional instruments into their sound that would have been unheard of on the first two-and-a-half albums.

But, it was with 1985’s shocking Be Yourself Tonight in which I realized this band was one for the ages. It was shocking to me in that they de-emphasized those synths and became a rock band. Maybe, I should have realized what would happen if I had paid more attention with their second single from their previous album, Touch, called “Right by Your Side.” This calypso-based song actually had guitars, bass, drums and steel drums. Yet, as great as the song was to me, I felt it was just a little turn in the road and not some hint at what was to come. Because, to me, Be Yourself Tonight was the masterpiece, as it tied the band’s past and future together in a nice set of great music with a consistency that they were not able to attain afterwards. That’s not to say the rest of their catalog is crap. Far from it. I am simply stating that Be Yourself Tonight represents their largest artistic achievement to date.

So, after that introduction, may I present to you My 20 Favorite Songs by Eurythmics. Let’s get this countdown started! 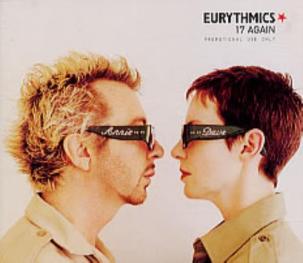 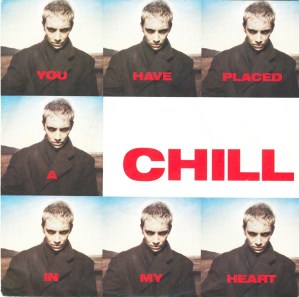 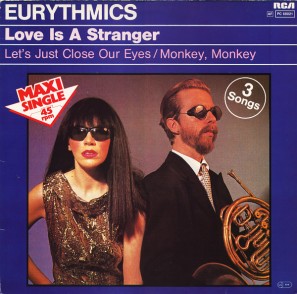 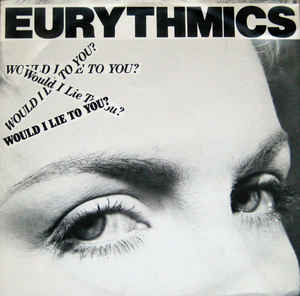 And, there you have it. My 20 Favorite Songs by Eurythmics, a band that SHOULD be inducted in the Rock & Roll Hall of Fame, among so many others, which is a whole ‘nother blog. I hope this make you want to go back to re-evaluate this duo for your own ears. See you tomorrow!