Last night, I visited my mother who now resides in the memory unit of a nearby nursing home. It was a great visit, as she was in art teacher mode and making suggestions for the improvement of the decorations of Christmas tree in the dining area. She said that it could use “more red.” That was classic old Mom. But, right before we left, she turned to my wife and asked what she wanted for Christmas. Well, immediately, my wife’s tears began to well, as for the first time in months, Mom had a brief moment of clarity. But, as we left, Mom was back in her world, where it seems I am now a baby, her parents are alive, but, somehow, she is NOT married to my dad. Simply put, Alzheimer’s is a terrible disease.

Now, if I had an inkling of musical talent, I know I would try to write a Christmas hit song. Oh, sure, I’d love to write a regular hit song, but a hit Christmas song makes a comeback every year, meaning annual paychecks. Let’s face it, Mariah Carey hit a goldmine when she wrote and recorded “All I Want for Christmas Is You.” Now, she has arguably the third most successful Christmas song, behind “White Christmas” and “Rudolph the Red-Nosed Reindeer.”

See what I mean? Heck, look at Clarence Carter. His blues career is average at best. But, whenever Christmas rolls around, we always hear his terrific “Back Door Santa.” So, when all of those Christmas compilations with his song on it sells, his royalty check just inflates. Then, there are those songwriting royalties that roll in from all the sales of cover versions of his song by all the rock artists who have decided they needed a Christmas song dripping with sexual innuendo., just like his “Back Door Santa.”

So, it’s on with the countdown. 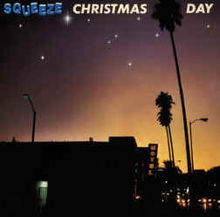 We are at the halfway point of this countdown. I hope everyone has a great weekend!