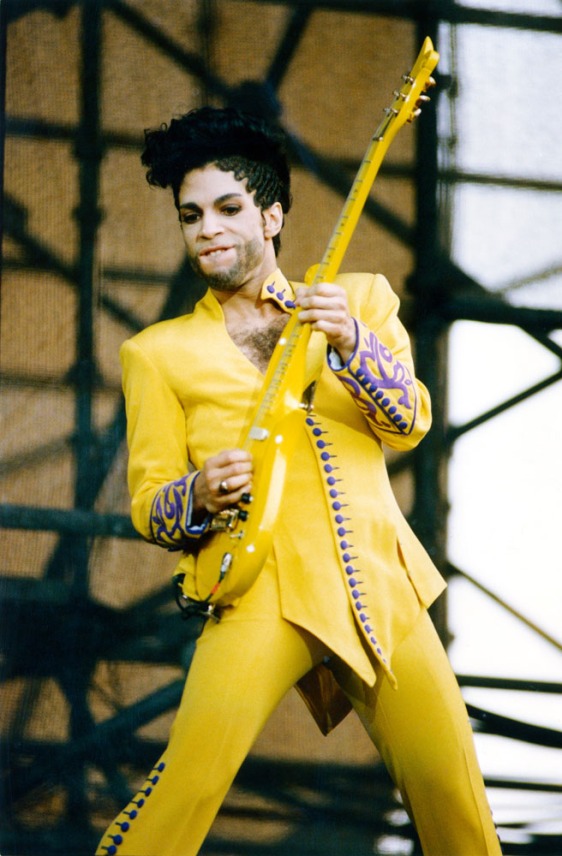 I believe the greatest part of being a semi-obsessed Prince fan is the wealth of material that is currently available and how much of it is so vital and life-affirming. When I got my first “real” job, you know, the one in which you actually used your college degree, I decided I would attempt to collect Prince music. Now, am I completist? I do not think so, but I am fairly close. First of all, I will die a pretty contented man even if I do not obtain all of his domestically released 7-inch and 12-inch singles in addition to all of his vinyl albums and CDs. That’s not my purpose in life. I’ve learned what happens when you place running, sports and winning above all other things now that my body has been permanently broken. So, these worldly crowns are no longer the purpose. The purpose is now more of finding my voice in this new paradigm.

What Prince’s music does for me is that it releases me from my body to an ethereal plane where for a couple of minutes my body can release its pain and just be. His music, in my mind, was all about inclusion, regardless of race, creed, orientation, or whatever label being thrust upon you. It’s also about the release of those shackles and the ecstasy of the freedom from those social bonds. And, probably most importantly, his music always takes me back to a time in my life that was just pretty awesome in the relative lack of responsibility I had. In a nutshell, its a combination of freedom, possibility, perspective and longing.

So, why do I find these harder-to-find tracks recorded by Prince so compelling when I only have lukewarm reactions to Tom Petty’s, Cheap Trick’s or R.E.M.’s? That’s simple! The quality of much of Prince’s unreleased tracks, B-sides and soundtrack/tribute album contributions is nearly as high as the material he released on his 30-something albums. When you hear a song like “Shockadelica” (even if he nicked the title from former Time guitarist Jesse Johnson’s 1987 album title) or “Erotic City” (the brilliant B-side to “Let’s Go Crazy”), you wonder just why those songs, or many of the others on this list, were ever left off an album. But, then again, Prince had discovered a brilliant way to market his singles during the vinyl era of the Eighties to maximize sales, thus making an individual artistic statement upon every single release that only added to his mystique.

Then, in the Nineties, when he was waging an artistic freedom war with his record label, Warner Bros, and changed his name to that damned unpronounceable symbol, his began to slowly release some tunes from the famous Vault. That’s when his true genesis began to truly glow, even though much of the public had walked away from him. The stuff he included in those two odds-and-sods collections of 1998 and 1999, Crystal Ball/The Truth and  The Vault: Old Friends 4 Sale respectively, were delightful teases giving us insights into his musical brilliance. Additionally, that war he waged for his artistic freedom only anticipated the collapse of the music industry and its future reliance on the internet for music distribution. 25 years later, we are all just now catching up to his vision. Who knows what other innovations he had up his sleeves? Then again, since most are still attempting to catch up to him, maybe that’s why his life was cut short. 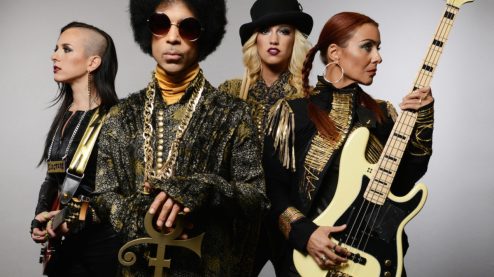 Yes, the internet has been a veritable Wild, Wild West with its plethora of material available, including bootleg versions, many of which just sound God-awful, of songs from The Vault. Still, I long to hear those shelved albums, like his new wave band The Rebels, which included guitarist Dez Dickerson or the trio of albums (Camille, Dream Factory and Crystal Ball) that were distilled into his brilliant double album from 1987 Sign “O” the Times. There could be some absolutely killer deluxe releases of his classic albums that run throughout the Eighties, especially 1999, Around the World in a Day and Parade.

But, until all of that happens, here’s my Top 20 of those harder-to-find Prince tracks that I just love. 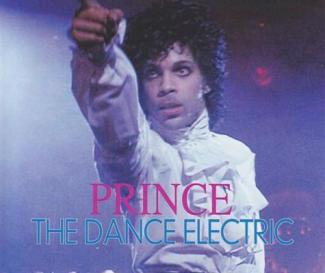 20. “The Dance Electric” (Purple Rain outtake, 1984). This can be found on Disc 2 of the Purple Rain deluxe release from a couple of years ago. This song shows just how adept Prince was at funk.

19. “Power Fantastic” (The Hits/The B-Sides, 1993). Recorded during the big purple burst of creativity in the mid-Eighties, this song could have been the emotional centerpiece of any Prince album.

18. “Irresistible Bitch” (B-side “Let’s Pretend We’re Married,” 1983). This song was tailored made for the dance floor in the early-Eighties. And, believe me, this song was used to great effect between tracks by Vanity 6 and The Time, only to end with “D.M.S.R.” and “Let’s Pretend We’re Married.” This song single-handedly began my Prince B-Side obsession.

16. “Crystal Ball” (Crystal Ball, 1998). This eight-plus minute epic was meant to be the penultimate song for his unreleased triple-album album of the same name. Once again, the song represents another “What if…?” moment.

15. “4 the Tears in Your Eyes” (We Are the World Album, 1985). Yes, Prince screwed up by not participating in “We Are the World” song recording. And, then, just when he and the Revolution were at their creative peak, he keeps them from performing at Live Aid. Instead, he submits this terrific track for the album and its accompanying video for Live Aid. Dang it Prince! Just steal the show from everyone at JFK Stadium! But backing away was maybe the plan all along.

14. “Dance with the Devil” (Batman outtake, 1989). This one can be difficult to find but is worth the effort. This is the song The Joker should have been dancing/defacing the art gallery to instead of “Partyman.” It’s darker and funkier, as if it truly were meant for The Black Album.

13. “F.U.N.K.” (Non-album single, 2007). You had to be quick to download this one because it was released right before Prince released Planet Earth. You know what? This song would have made Planet Earth a much stronger album if it had been included.

12. “FALLINLOVE2NITE (feat. Zooey Deschanel)” (Non-album single, 2014). This is NOT the version released on Prince’s HITnRUN Phase 1 album. Instead, it was used on that New Girl TV show on FOX when Prince was a special guest. Deschanel, who has a terrific singing voice, sang this song with Prince after playing ping-pong with him. Also, the episode contains THE greatest reaction of a character to a special guest of all-time when Deschanel’s character’s boyfriend, Nick, just faints when he meets Prince. That would have been totally my reaction. Anyway, this version just seems tailor-made for the radio and makes the album version just pale in comparison.

11. “A Case of You” (A Tribute to Joni Mitchell, 2007). Prince was a huge Joni Mitchell fan, but I always wondered if he could really pull off such an iconic singer like her. Remember, his covers of hits by Bonnie Raitt and Sheryl Crow were decent at best. But, the stark production of this acoustic-based song is absolutely stunning. It actually makes me wish Prince had jumped on the unplugged bandwagon in the Nineties. 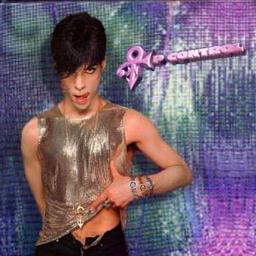 10. “P. Control” (Crystal Ball, 1998). This song has popped up everywhere in the Prince catalog, but, still, I feel like not enough people have heard it. This song is everything that The Black Album was supposed to be: funky, dark and dirty. And, this was one of the Prince songs actually played at my younger son’s wedding!

8. “(Love) or (Money)” (B-Side “Kiss,” 1986). How did this song not make the cut for Parade? And, why was it left off The B-Sides, Crystal Ball AND The Vault? This is another example of the B-Side making an excellent one-two punch with the A-Side.

7. “How Come U Don’t Call Me Anymore” (B-Side “1999”). Sure, many of you think this is an Alicia Keyes song, but sorry! My man just kills on this piano-based ballad. I understand why it didn’t fit on 1999, but its gospel feel might have worked nicely on Purple Rain. Then again, what the hell do I know? Keyes has based her whole career on this song, and that’s a smart move.

6. “Good Love” (Bright Lights, Big City OST, 1988). How did this movie soundtrack end up with this brilliant power poppish slice of purple dance/pop? I still scratch my head thinking how good this would have been if Prince could have just found a place for it on Lovesexy. 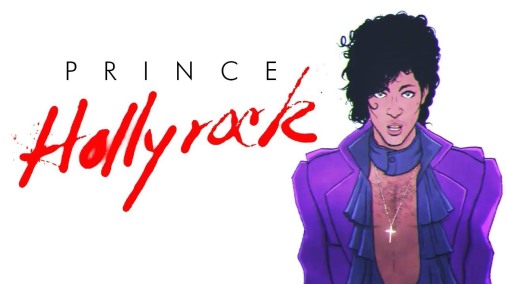 5. “Holly Rock” (Originals, 2019; originally recorded by Sheila E. in 1984). This is easily the best song on this new compilation, and I actually prefer it to Sheila’s version. Can you imagine this was shelved for 35 years? It just is so mind-blowing.

4. “17 Days” (B-Side “When Doves Cry,” 1984). When people were comparing Prince to Hendrix and Sly Stone, you have to look no further than this song to find it. The song begins with a Hendrixian guitar and slides into a funky Stone groove that was totally a Prince-thing. Yet, another example of two songs on a single that compliment each other so very well.

3. “She’s Always in My Hair” (B-Side “Raspberry Beret,” 1985). This is such a badass funky rock song that leaves me scratching my head as to why it was never released on one of his albums, especially Around the World in a Day. Seriously, it was a huge mistake to leave this song off that album. This is a true Prince rocker that should be heard by EVERYONE!

2. “Shockadelica” (B-Side “If I Was Your Girlfriend,” 1987). I feel like a broken record! This is one of Prince’s greatest songs ever! And it’s a B-Side! WTF!!! I think it was meant for the Camille album which would have included all those songs on Sign “O” the Times which had Prince’s vocals electronically altered. Thank God he did that BEFORE autotuning became all the rage in the 21st century. 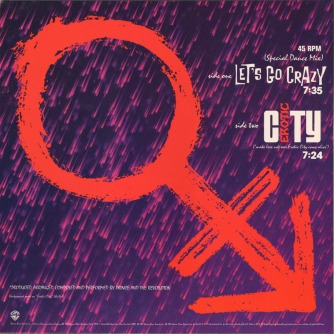 1. “Erotic City (feat. Sheila E.)” (B-Side “Let’s Go Crazy,” 1984). Was there any doubt? This song should have been a hit in its own right as much radio play it received during the Summer of 1984. As a matter of fact, this kicked off a great summer of terrific B-Sides by Bruce Springsteen (“Pink Cadillac”) and so many others. Throw in Marshall Crenshaw’s “My Favorite Waste of Time” and John Mellencamp’s “On Broadway” B-Sides, and you have four of the all-time great B-Sides in rock history. On the other hand Sheila E. claims she and Prince are singing “funk.” Anyone care to argue? Ah, who cares? It’s got a good beat, and it’s easy to dance to!