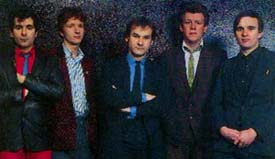 Back in the Seventies and into the Eighties, record stores often doubled as a head shop for all of your “legal” smoking needs (Who were they fooling? Did anyone ever knowingly smoke tobacco from a bong?) and were named after spiritual or mythical notions. In Muncie where Ball State is located, one such business was called Stonehenge, though it conveniently had two locations, especially the one located in the business area just a couple blocks off campus called The Village. Elsewhere in Central Indiana, there was another set of stores called Karma which could be found in towns all around. Needless to say, it was an interesting time for the independent record store around here.

Now, when I got to Ball State in September of 1981, The Village had aforementioned Stonehenge as well as a used record store creatively name The Used Record Store. It goes without saying that the place unfortunately only lasted a couple of years before the owner picked up stakes and moved to a hipper college community. That was too bad because that guy introduced me to so many cool artists during those years. Stonehenge quickly closed its Village location after The Used Record Store because some lame college variety store called The Discount Den moved in and drove the others away by pulling a Best Buy move of offering new albums at a very discounted price.

But back to Stonehenge. That place was a relic of the Seventies, with the smell of incense permeating throughout the place to “cover” the pot odor. The place was clean, nicely stocked with a great selection of albums and 12-inch singles, which I loved. But, their image was more Led Zeppelin than punk and new wave, so they were having a problem pulling in the average Eighties college student not looking for their smoking wear. Plus, they were always a tad expensive, especially when you could go across the street and down in a basement to buy used records in primo condition. And that guy had everything from The Velvet Underground to The Misfits to The Ramones, all of which I SHOULD have purchased. No, I went for the very poppish new wave stuff instead.

Still, that first weekend at college, I walked down to The Village to do my first record hunt as a big bad college student. As I entered Stonehenge, I perused the records looking for the perfect purchase. To be honest, I had in my mind that I was going to look for the new album by a band I had just read about in Rolling Stone called Squeeze. The album was East Side Story. You see, at the time, the main songwriters, Chris Difford and Glenn Tilbrook were being pimped as a modern day Lennon and McCartney, and some of the new album was produced by Elvis Costello. All of that meant I had to buy this album.

So, after a half-hour of bin diving, I picked up the Squeeze album and purchased it. Then, I walked quickly back to the dorm to listen to the album, since I knew I had the room to myself. My roommate that year was an architecture major and those people never had lives at Ball State. Anyway, as I was walking back, I ran into my English professor who stopped me to ask what I had purchased. He was one of those stereotypical boomer profs that wanted to be considered cool and always had awesome theme topics about which to write. He must have read my introduction theme because he knew I was into music. Anyway, I told him this new album by an English band called Squeeze. He told me he couldn’t wait to read about it in a theme. By the way, when my Monday 8 AM English class rolled around, the class was informed that he would no longer be our professor and that this other one would be taking over. I never did learn why he was dismissed. Could he have been visiting Stonehenge too but not for music? Who knows?

Anyway, when I finally got back to my dorm room, I unwrapped the album and put it on the turntable. And it was more that what I expected. It was as if Elvis Costello had totally studied at the alter of The Beatles’ Abbey Road and updated the sound with flourishes of new wave production sounds. It was both timeless and of its time, like all great music. Immediately, I became a big fan of the band and specifically of this album. I listened to it often. For several weeks, East Side Story was my musical obsession. The lyrical wordplay was inspiring to my theme writings for the rest of the quarter. I was literally pulling metaphorical phrases out of my ass during that time, which was winning the praise of my professor. It was getting to the point that she asked me at midterm what my major was. When I told her biology and chemistry, her face looked stunned. She asked me if I was sure, and I said that I was. Then, she became the first person in my life outside of elementary school to tell me that I could be a writer. At first I laughed, then she said very firmly to me, “If science does not work out for you, become a writer.”

So, here I am, writing. Most of my writing is still drivel in my opinion, but it does keep me out of trouble. But, I do still listen to Squeeze, and I am so excited that I will finally get to see them perform live this summer when they open for Daryl Hall & John Oates. And, you know, I have never understood why the band never caught on here in the US. It might be their music and lyrics, much like The Kinks, The Jam (Paul Weller and The Style Council too) and Madness, are just too English for Americans to understand. That’s too bad because people over here are generally missing out on some terrific music from Squeeze.

So, today, I am presenting my 25 favorite Squeeze songs. Enjoy!

10. “Up the Junction” (Cool for Cats, 1979). For a single from a sophomore album, this is just a brilliantly written tune. This song may just be a perfect introduction to the band because you get it all, from the nods to Lennon & McCartney to Costello and all points in between.

9. “Annie Get Your Guns” (Singles – 45’s and Under, 1982). An unreleased track added to this fantastic compilation unknowingly was the final stamp on the first phase of the band’s career.

8. “Slap & Tickle” (Cool for Cats, 1979). Who writes songs about questionable subjects and makes it all sound so innocence? These guys do!

7. “Hourglass” (Babylon and On, 1987). Just when everyone was ready to write off Squeeze as a relic from the go-go days of new wave, the boys come up with their biggest hit in the States, this stellar slice of Squeeze perfection.

6. “Cool for Cats” (Cool for Cats, 1979). The song that was the band’s very first calling card number. Since surpassed, but for a year it was all anyone talked about when discussing this band.

4. “In Quintessence” (East Side Story, 1981). The first song I ever heard by Squeeze remains one of my absolute favorites if only because it answers the unasked question, “How the hell does one write a great pop/rock song with the word ‘quintessence’ in the title?”

3. “Another Nail in My Heart” (Argybargy, 1980). Boy, these guys sure know their way around metaphors even when dealing with the stinging hurt of a teen love lost.

2. “Pulling Mussels (From the Shell)” (Argybargy, 1980). Once again, the wordplay in their lyrics is unmatched. Just when you think you’re pulling a hamstring, the lyrics are using the imagery of shellfish. Encore! 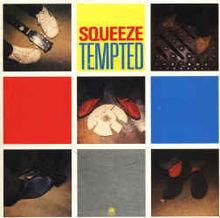 1. “Tempted” (East Side Story, 1981). Those only non-Difford & Tilbrook song on this list is the band’s most well-known and perhaps most beloved. This tune, sung and written by former lead singer and keyboardist of Ace (“How Long,” 1975) and future member of Mike + The Mechanics Paul Carrack, is a soulful take on the time-honored subject of sexual infidelity. The sexy soulfulness of the music is matched brilliantly by the lyrics. This is a perfect song!