Hello outside world! This is COVID-19-Free Music Blog coming to you from the quarantined Midwestern home of this writer. As of this writing, my wife and I are hunkered down for a little self-quarantine action as our beautiful daughter-in-law, a respiratory therapist, was exposed to a patient who later tested positive for the virus. Since she is a healthcare worker, she is required to continue working until she displays symptoms. Our son, on the other hand is now a stay-at-home dad for an indefinite period of time until this whole thing blows over. Of course, our indirect exposure came from contact with the two of them because we take care of their son. Needless to say, our concern over the past couple of days has been our family and not really keeping up with this blog. Though from the spike in my traffic stats, it seems that people are looking for ways to pass their time during this world-wide crisis.

Just a friendly reminder from the old medical technologist here, wash your hands often, clean your work areas and keep your distance from strangers. Oh, and I know how some of you are, but no hugging and handshaking with others outside of your home.

Enough of this! Let’s take our minds off this whole thing for a minute or two. 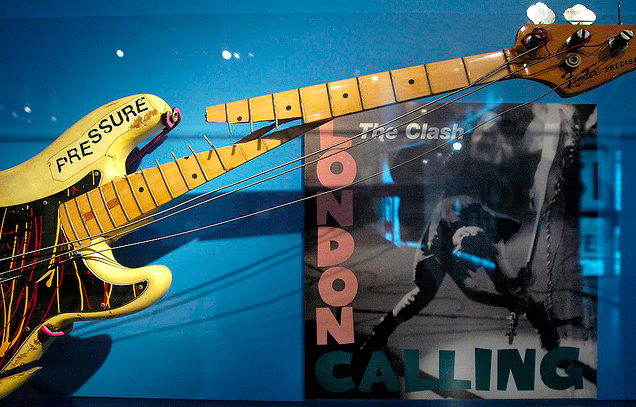 As I have stated often in this blog, my favorite album of all-time is without question London Calling by The Clash. Everything about the album was perfect. From the cover art, that iconic photo of bassist Paul Simonon in the process of smashing his bass guitar to the co-opting of the artwork of Elvis Presley’s debut album, to the fanzine feel of the lyric sheets to the hype sticker proclaiming The Clash to being “The Only Band That Matters” to the music itself, the whole thing was pitch perfect in cluing the listener that this was going to be an experience like none other. And, I gotta admit, I was hooked from the opening strains of “London Calling” through all four side to the very last song, the hastily added (and unlisted on the track listing) “Train in Vain (Stand by Me)”. This was a major statement by a band poised to take over the world.

That album sent me on my journey with The Clash. Of course, I had to backtrack a bit and discover their first two albums, the punk classic self-titled debut and their transition album Give ‘Em Enough Rope, followed by their mini-album of odds and sods, Black Market Clash. They followed up London Calling, that double album of perfection, with a sprawling triple album of craziness, experiments and gems called Sandinista! That one may just be their White Album, that messy, jointed double album by The Beatles, only with much cooler songs and experiments.

Then, the classic line-up unknowingly released their last album in 1982, their commercial breakthrough, Combat Rock. With that album, the band was all over MTV, on Fridays! and SNL, had a Top 10 hit song, opened for The Who on their first of many farewell tours, and seemed poised to actually become the biggest and most important band in the world. 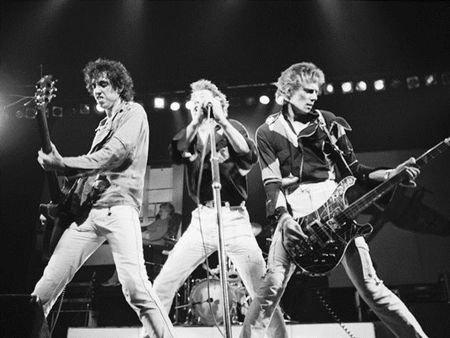 And, then, it was over. Just like that, a void opened, and U2 filled it. There’s much debate as to what caused the band to implode. Management? Probably. Ego? Yes. Drugs? Without a doubt. Whatever the cause, happened and history is what it is. Yet, these five albums, along with a smattering of singles and B-sides, The Clash’s catalog of music is nothing short of greatness and should be required listening by every rock fan until the end of time.

This week, I received a text message that my older son and his wife were going to slowly listen to Rolling Stone magazine’s Top 500 Albums, skipping the greatest hits compilations. As they listened, his wife would re-rank the albums. Well, as of this writing, London Calling is number one on her list, but I have an inkling that Abbey Road will be more to her liking. But, I did receive a series of four short videos of my granddaughter dancing to “London Calling,” just spinning, wiggling her booty and squealing in delight as the song continued. Then, as the song concluded, that tiny girl turned to the stereo and began clapping. Right there, I knew the torch of The Clash had been passed to the third generation of my family. Those videos filled my heart to see the joy of music being expressed by the 20-month-old child.

So, after spending a few days spinning some vinyl, though I do listen to London Calling about once every other week, I have compiled my Top 50 songs by The Clash. So, let’s get this party started!

10. “Hitsville U.K.” (Sandinista!, 1980). I loved the fact that The Clash took the Motown theme of Hitsville USA and turned it around into a gem of a pop song buried in that eclectic musical statement of a fourth album. This tune may be one of the lost hits of the Eighties.

9. “Police on My Back” (Sandinista!, 1980). This is a punk song through and through. Green Day based their whole sound on this song.

8. “Train in Vain (Stand by Me)” (London Calling, 1979). The song that first put The Clash into the American Top 40. This is a great rolling pop song based upon the rock tradition of the sound of a rolling train.

7. “Police & Thieves” (The Clash, 1977). Reggae producers have often been quoted as saying that The Clash were the only white boys who could actually play reggae, which is a high compliment. This cover of a huge reggae hit is the proof. A perfect song at a perfect moment in time.

6. “Straight to Hell” (Combat Rock, 1982). Much praise has been heaped upon the songwriting talents of guitarists and vocalists Joe Strummer and Mick Jones. And, the world knows the Topper Headon was a world-class drummer. But, I believe Paul Simonon’s bass playing is totally underrated. So, here is example A for this honor as it was his bass that MIA sampled for her classic hit “Paper Plane” a decade or so ago. That’s right! This is the source! I remember blowing my younger son’s mind when I played it for him. He totally had forgotten. 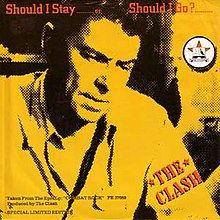 5. “Should I Stay or Should I Go” (Combat Rock, 1982). If I were to pick a song to be an example of punk energy, I would have a difficult time choosing between this song and the Ramones’ “I Wanna Be Sedated.” Both were my go-to songs for an energy pickup on the dance floor during my Dj-ing days.

3. “(White Man) In Hammersmith Palais” (The Clash, 1977). This song broke the band in England with its description of a riot in a London ghetto. How punk is that?

2. “This Is Radio Clash” (Non-album single, 1981). At the time, our heroes were hanging in New York City, and, especially in the case of Mick Jones, were under the influence of hip hop music. And, in response of the cross-pollination that was taking place between punk, new wave and hip hop, The Clash created this totally underrated fusion that continues to enthrall me nearly 40 years later.

1. “London Calling” (London Calling, 1979). Where “(White Man) In Hammersmith Palais” was a call to arms to the youth of England, “London Calling” was the world-wide mission statement. Basically, The Clash weren’t messing around, and they were going to call out all the hypocrites and phonies and abusers in the world. This was the truth and remains so to this day.