Back in the early-Seventies, the first musical artist that became an obsession was Alice Cooper. That band was the perfect entryway artist into rock music. First, the band had a cartoon image, so the jump from the Banana Splits, The Monkees, The Archies and The Partridge Family was not that big of a stretch, at least image-wise, though it goes without saying that the boys in Alice Cooper were a bit more on the Charles Manson side of provocative. Plus, the band played a muscular version of the bubblegum music on which I was weaned.

Now, I had a band allegedly named after a witch, doing a freak side show from the traveling vaudeville show coupled with a touch of the B-movie horror shows you could watch on the local TV station hosted by Central Indiana legend “Sammy Terry.” And, the band was playing that bubblegum music run through a touch of Black Sabbath/Deep Purple guitars. And, their lyrics were NEVER going to win a Noble Prize for Literature. Yet, the teens and emerging group of kids called “tweens,” who were too old for “kiddie stuff” but never cool enough to hang in the back of the school bus with the high school teens. Alice Cooper was the perfect music for the annoying pre-teen kids like me.

So, following in Alice Cooper’s wake were a multitude of visually dazzling artists who garnered a small but fervent following. And, I am talking about the English glitter artists, none of whom caught the mass fancy of the Stateside kids like Cooper did. Then, in 1975, a live album exploded like an atomic bomb in the lives of kids my age, meaning around 12. This was must-listen music! The album was Alive! and the band was KISS.

My initial exposure to this album occurred down the street at my second home where my non-family sisters lived. The Dunwiddie girls were two of my closest friends in my neighborhood. Almost every day, I walked down to their house and hung out with Kim and Lori. We sat in the living room, talked, did homework and listened to music. Boy, did we ever listen to music! In retrospect, these moments seemed to last hours. But Kim and Lori were my free teenage therapists, as their home became a refuge for me from the stress of the meltdown of my own nuclear family. At their home, God bless their parents, I had some place to get away from the negativity that gnawed at me on a daily basis.

Anyway, it was at their home in which I was introduced to this Seventies pot of aural nirvana called Kiss Alive! I remember just being blown away by the energy of the sound of the crowd and the performance of the band. And, no, the current knowledge that all of it was doctored up in the studio will NEVER diminish the impact of that album after Kim cued it up on her family’s console stereo. I can only imagine what a hyperactive mess of pre-teen display of testosterone-driven tribal dance I was displaying. And, my own natural inclination to this music was reinforced when Kim’s varsity basketball star boyfriend told me he loved that album too as he cued it up on the console while he was visiting her. 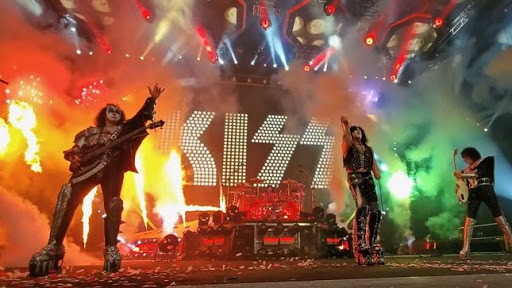 Let’s see! First, the girls, who owned it, loved it. Then, the older boyfriend who was a basketball hero of mine, said he loved it and that some of the team were going up to Fort Wayne to see the band in concert during Christmas Break, well, I must be cool because I LOVED this band. At that moment, I became truly obsessed with my first musical group. And, that’s when I started buying Creem, Circus, Hit Parader and Rolling Stone magazines, seeking more and more information on Kiss. And, within a year, I became a card-carrying member of the Kiss Army, complete with a Pacifica belt buckle and a T-shirt that my mom created for me.

And, that light burned bright for the band until 1979. By then, I was struck by the punk/new wave bands of the era, that Kiss seemed more like sell-outs than a band ready to take on the world. Seriously, I did not need my favorite band on a lunch box, nor did I need to purchase G.I. Joe/Barbie-sized dolls of Kiss or a make-up kit. Like many kids my age, I did go down the initial supply-side rabbit hole of Kiss merchandizing, as I stated previously that I owned a belt buckle, all of their albums, a couple of posters and wore a homemade T-shirt. Oh, and I did have the first two or three comic books the band appeared in, like the two books of my favorite Marvel character, Howard the Duck, in addition to the band’s own comic book. But, those lame solo albums burnt me out on the band. Plus, I was beginning to hear new music from Elvis Costello, Blondie, The Cars, The Clash, The Police, Sex Pistols, etc., and they were a breath of fresh air when compared to the tiresome sound of Kiss. But, from Christmas time of 1975 through the fall of 1978, I was a huge Kiss fan. After that, I was never as passionate about another artist again, even though I grew to love Prince, Tom Petty, Bruce Springsteen, R.E.M. and Queen more than I loved Kiss back then. But, I was never as passionate about an artist the same way again. 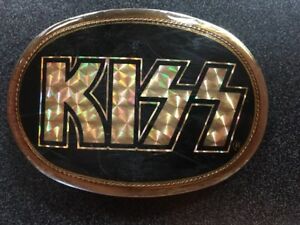 Whatever the reason, I was feeling a bit nostalgic, so I pulled out the old Kiss vinyl, cleaned them up and began playing them. Then, I saw the snow coming down, reminding me of that snow flurry-ridden day on which I first heard the band on vinyl. So, I cranked up my little stereo and took a brief trip in the Wayback Machine. With the Christmas decorations up in our home and the first snow flurries landing on the warm ground outside, the music mixed with those visuals to conjure up some memories that are getting smaller in my review mirror of life. But, there’s just something about Paul Stanley’s yelps that moves my soul away from its darkness toward a lighter, brighter attitude.

So, with that introduction, let’s take a look at My Top 50 Favorite Songs by Kiss. A quick disclaimer: I am by NO stretch of the imagination a Kiss expert these days. Today, I am more of a passing fan, so I am not a Einstein of Kiss Trivia. However, I do appreciate the band’s music. And one last admission: I have NEVER seen the band in concert. Always wanted to, but never had the right circumstances to see them. Oh well! At least I have this list.

Even though Kiss no longer is my favorite rock artist, they remain a band that continues to strike a pleasant chord for a day or so of nostalgia. Maybe this list will give you the subtle push to put a little Kiss back into your life. Until next time, peace.

2 thoughts on “As Long as There Are Pre-Teen Boys, We Will Always Need KISS”